Jasprit Bumrah and Bhuvneshwar Kumar were included in the India squad for the final three ODIs against the Windies. 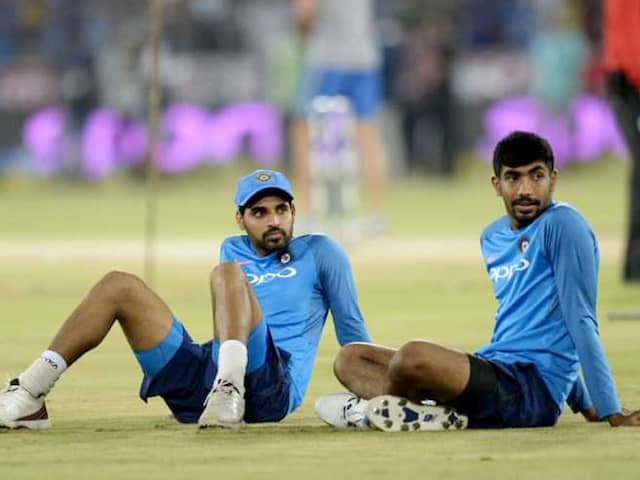 Jasprit Bumrah and Bhuvneshwar Kumar were included for the final 3 ODIs against the Windies.© AFP

After not being part of the first two ODIs, fast bowlers Jasprit Bumrah and Bhuvneshwar Kumar returned as selectors announced the 15-member India squad for the final three One-day internationals (ODIs) against the Windies on Thursday. Umesh Yadav managed to retain his place but Mohammed Shami, who took three wickets in the first two ODIs, was excluded from the team. Both Bumrah and Bhuvneshwar were rested for the first two games after impressing for India during the Asia Cup 2018 (ODI format) in the United Arab Emirates last month.

Shami and Umesh both underperformed in the first two ODIs against the Windies but the former got the selectors' axe.

In the first ODI in Guwahati, Shami conceded 81 runs in his allotted 10 overs, taking two wickets while in the second match in Visakhapatnam he took one wicket and gave away 59 runs.

Umesh ended the first ODI with figures of 0/64, and while he added a wicket to his tally in the second match, he was far more expensive, giving away 78 runs in his 10 overs.

India lead the five-match ODI series against the Windies 1-0. India won the first ODI by eight wickets but Shai Hope helped the Windies salvage a draw in the second ODI with a last-ball boundary.

The third ODI is slated to be held on October 27 at the Maharashtra Cricket Association Stadium in Pune. The fourth ODI will be played at the Brabourne Stadium in Mumbai on October 29 with Greenfield International Stadium (Thiruvananthapuram) hosting the final match of the ODI series on November 1.

Bhuvneshwar Kumar India vs West Indies 2018 Cricket
Get the latest Cricket news, check out the India cricket schedule, Cricket live score . Like us on Facebook or follow us on Twitter for more sports updates. You can also download the NDTV Cricket app for Android or iOS.