Chasing 322 to win at the start of innings and five off the last ball, Windies batsman Shai Hope hit India seamer Umesh Yadav for a boundary. 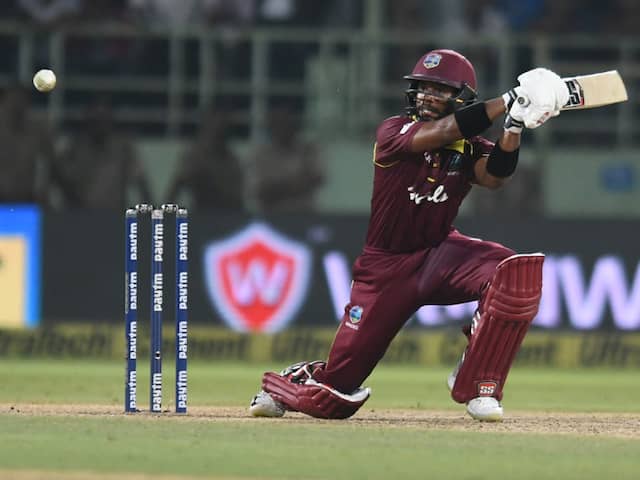 Windies top-order batsman Shai Hope stunned India by scoring an unbeaten century to help the visitors salvage a draw in the second of five-match One-Day International (ODI) series at Visakhapatnam on Wednesday. Coming into bat after the Windies lost their first wicket at 36 runs, Kieran Powell (18), Hope played a brilliant knock, scoring 123 runs from 134 deliveries to stop India's charge in the series and souring the day for milestone man Virat Kohli.

In the post-match press conference, the 24-year-old Hope revealed how he managed to hit the in-form Umesh Yadav for a boundary on the last ball of the match.

Chasing 322 to win at the start of innings and five off the last ball, Hope cut India seamer Umesh Yadav for a boundary through point to level the scores.

He said that his aim was to just put bat to ball in the last delivery and he second-guessed Umesh's delivery correctly.

"Last ball I knew a wide yorker was coming at the end, and I had to get bat on the ball. I didn't get enough bat but it was enough," Hope said.

Hope hit only his second ODI century on Wednesday to help the Windies tie the match after India had put on an imposing 321 for six after opting to bat.

He, however, said the Windies need to be much more consistent as a team.

"Definitely, such knocks improve your confidence. You have to gain after every innings. It was a matter of time before I got a big score," said Hope.

"(But) we need to be more consistent as a team."

Hope's unbeaten 123-run knock came at a crucial juncture for the West Indies.

He joined forces with Shimron Hetmyer after the Windies lost three wickets and added 143 runs for the fourth wicket to keep his team in the hunt.

However, first game centurion Hetmyer (94) got out with the visitors still requiring 101 runs in 18 overs.

"There was a change in approach after that (Hetmyer's dismissal). We needed to take the innings deep," Hope said.

Speaking about batting with Hetmyer, he said, "It's pretty different with him, he likes to keep the scoreboard ticking. As long as we take it to the last five overs, we knew we stood a chance."

Thanks to the tie, India continue to lead the five-match series 1-0 after two matches.

West Indies Cricket Team India vs West Indies 2018 Shai Hope Cricket
Get the latest updates on IPL 2020, check out the IPL Schedule for 2020 and Indian Premier League (IPL) Cricket live score . Like us on Facebook or follow us on Twitter for more sports updates. You can also download the NDTV Cricket app for Android or iOS.