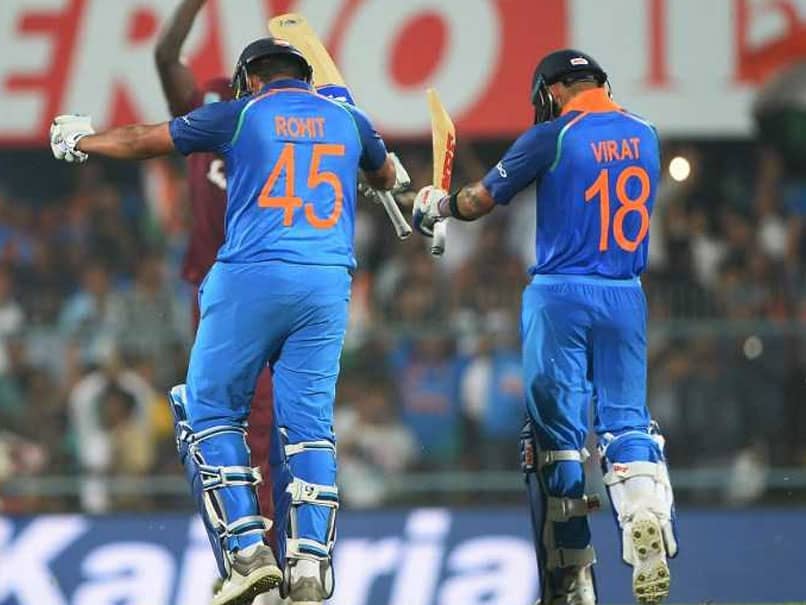 Skipper Virat Kohli and his deputy Rohit Sharma conjured up breathtaking centuries as India's ruthless domination over the West Indies continued with a facile eight-wicket win in the first One-day International in Guwahati on Sunday. Making mockery of what looked like a stiff 323-run target, the home team cantered to the win with 7.5 overs to spare, taking a 1-0 lead in the five-match series. Kohli pounded the Caribbean bowlers with 21 fours and two sixes to raise his 36th ODI century and now needs just 81 runs to join the elite club of cricketers who have amassed 10,000 runs in the One-day format.

After early departure of Shikhar Dhawan (4), Kohli raised a massive 246-run stand for the second wicket with Rohit, who remained unbeaten on 152.

It was Rohit's 20th ODI hundred which came off 117 balls with 15 fours and eight sixes.

While Kohli and Rohit plundered boundaries to entertain the packed stadium, it painted a sorry picture of the West Indies attack, which once was intimidating for any batting line up in the world.

The only high point for the West Indies while defending their total was 21-year-old newcomer Oshane Thomas' raw pace up front.

Playing his first ODI in more than three months, Kohli was unstoppable. It seemed another routine affair for Kohli as he also got past the milestone of 2000 International runs in the calendar year. He emulated iconic Sachin Tendulkar in scoring 2000-plus runs in three successive years.

After Kohli was stumped off leg-spinner Devendra Bishoo, India's vice captain took the side home in company of Ambati Rayudu (22).

After their rout in the Test series, West Indies did a good job by putting on board a challenging 322 for eight, capitalising on the absence of India's front line pacers Bhuvneshwar Kumar and Jasprit Bumrah.

The duo has been rested for the first two ODIs and the 21-year-old Shimron Hetmyer (106) put to sword an under-strength Indian attack to raise his third ODI hundred.

Hetmyer punished the Indian bowlers with six fours and as many sixes in his entertaining 78-ball knock.

However, any hopes of a close contest evaporated when Kohli and Rohit started striking the ball clean and hard.

The Indian bowling looked lacklustre while the fielding was shoddy as India, on a high after their Test series win, seemed to have underestimated their opponents.

The Guyanese lad brought up his half-century in 41 balls and brought up two 50-run plus partnerships with Rovman Powell (22) and skipper Jason Holder (38).

Hetmyer notched up his century by lofting Mohammed Shami for a six over extra cover.

While he used brute force against the pace, Hetmyer also looked fluent against the spin duo of Yuzvendra Jadeja and Ravindra Jadeja before being dismissed by the latter after immediately betting the milestone-mark.

Looking to redeem themselves after the 2-0 Test series thumping under six days, the touring side put up a strong challenge after being put in by home captain Virat Kohli.

Visiting skipper Jason Holder on the eve of the match had said 300-plus is the benchmark of ODI cricket and his young batters responded well with Devendra Bishoo taking the team past the milestone in the penultimate over.

Powell and his debutant opening partner Chandrapaul Hemraj dealt in boundaries against Shami and Yadav.

West Indies lost three wickets in quick succession but the Guyana youngster came to take charge after Marlon Samuels departed for a duck in his landmark 200th ODI.

Rohit Sharma India vs West Indies 2018 Cricket
Get the latest updates on IPL 2020, check out the IPL Schedule for 2020 and Indian Premier League (IPL) Cricket live score . Like us on Facebook or follow us on Twitter for more sports updates. You can also download the NDTV Cricket app for Android or iOS.