Kohli consumed 101 deliveries to get to this milestone in Guwahati. 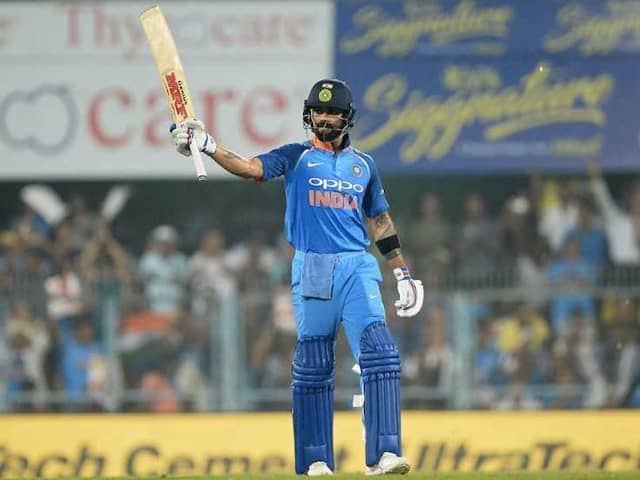 Kohli brings up his 36th century in Guwahati© AFP

India captain Virat Kohli notched up his 36th ODI ton against the West Indies during the first match of the five-match ODI series at the Barsapara Cricket Stadium in Guwahati. Kohli consumed 101 deliveries to get to this milestone while chasing a 323-run target against the Windies. This has been a pleasant return for Kohli to India's captaincy as he was rested during the 2018 Asia Cup, which India won under Rohit Sharma's captaincy in a convincing manner. India had beaten Bangladesh in the final, which did go down to the wire.

Earlier in the match, batsman Shimron Hetmyer hit an attacking century to help West Indies post 322 for eight. Hetmyer made 106 during his 78-ball knock, including 6 fours and 6 sixes, after the tourists were put into bat first. Leg spinner Yuzvendra Chahal claimed three wickets, returning impressive figures of 3-41 from his 10 overs.

Chahal then combined with the Indian pace duo of Shami and Khaleel Ahmed to rattle the opposition top order after trapping Marlon Samuels for nought.

But Hetmyer counter-attacked, building crucial partnerships including a 74-run sixth-wicket stand with Rovman Powell, who made 22.

Hetmyer hit a six over extra cover off Shami to bring up his third ODI ton and the first against India.

He celebrated the feat with a salute to the Caribbean dressing room before getting a hug from skipper Jason Holder at the other end.

But the left-handed batsman fell to Jadeja in the very next over, after a mistimed slog sweep went into the hands of debutant Rishabh Pant at long leg.

Holder, who was dropped on 31 by Pant off Chahal, contributed with a useful 38 before being bowled by Chahal.

Devendra Bishoo, on 22, and Kemar Roach, on 26, put on 44 runs for their ninth wicket unbeaten stand to take West Indies well past the 300-run mark.