Ravindra Jadeja almost messed up an easy run-out with both batsmen stranded at the same end. 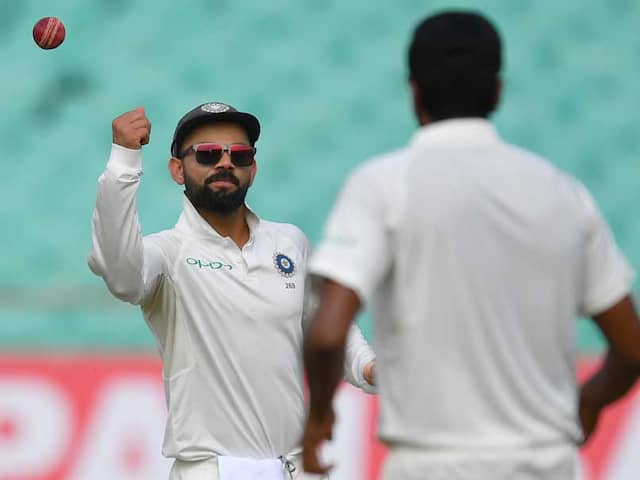 Ravindra Jadeja was unstoppable on the second day of the first Test against the West Indies at Rajkot. Not only did he hit his maiden Test century, but also took a wicket and registered a run-out. Although India are in a commanding position in the opening Test of the series, captain Virat Kohli's reaction to Ravindra Jadeja-effected run out proves how passionate he is about winning the match. The incident occurred in the 12th over of the match when a miscommunication between Windies batsmen Sunil Ambris and Shimron Hetmyer saw the latter depart for 10, courtesy a Jadeja direct hit.

Explaining the whole incident that left Kohli unimpressed, Jadeja said, "Both batsmen were at the same end, so I thought I could easily hit the stumps. I was just walking at the stumps and I didn't think he (Hetmyer) will start running.

Talking about his maiden Test century, Jadeja said, "Obviously after nine years of international cricket I am scoring a hundred, so it is a special moment. Whenever I reached 70-80 in the past I thought about my hundred but threw my wicket away.

"I have made big hundreds in the domestic circuit, so I thought I can get hundreds at the international level too. Today I told myself that I need to reach the mark. I was really happy; whenever you get your first Test hundred it gives you a lot of joy," the left-handed batsman said.

Virat Kohli India vs West Indies 2018 Cricket India vs West Indies, 1st Test
Get the latest Cricket news, check out the India cricket schedule, Cricket live score . Like us on Facebook or follow us on Twitter for more sports updates. You can also download the NDTV Cricket app for Android or iOS.