Die-hard fans of MS Dhoni erected a 35-foot cut-out of the former India captain to give him a warm welcome. 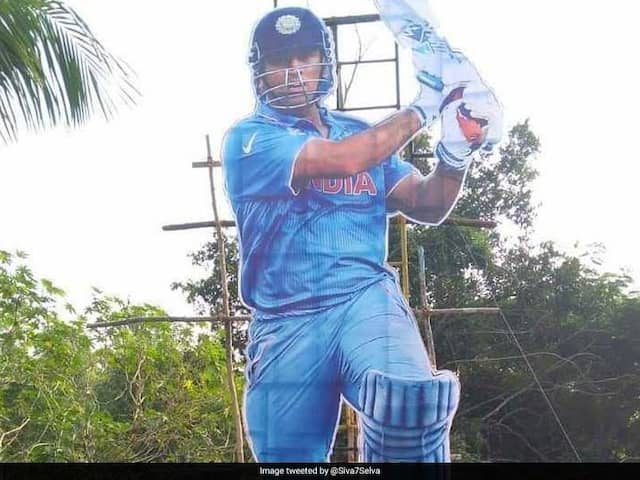 Fans of MS Dhoni erected a 35-foot cut-out of the former India captain in Thiruvananthapuram.© Twitter

Ahead of the fifth One-day International (ODI) between India and the Windies in Thiruvananthapuram, die-hard fans of Mahendra Singh Dhoni erected a 35-foot cut-out of the former India captain to give him a warm welcome. Dhoni's Indian Premier League (IPL) franchise Chennai Super Kings (CSK) took to Twitter to upload a video where fans can be seen working on the cut-out. The Indian cricketer's fans also flooded CSK's comments section to praise Kerala for the show of love and commitment towards Dhoni.

Dhoni, who was not included for the T20I series against the Windies, is just one run short of entering the 10,000-run club and becoming the fifth Indian and 13th overall to do so.

Dhoni has accumulated a total of 10,173 runs in the 50-over format, however, the record also contains the 174 runs which he smashed against the Africa XI while representing the Asia XI in a three-match rubber in 2007.

Virat Kohli, in the note, thanked Kerala tourism for their hospitality and urged everyone to go and visit Kerala to experience the positive energy of the state.

Thank you Virat, @imVkohli for the nice words you have shared. We are delighted to know that #Kerala makes you happy every time you are here. Enjoy your stay here & have a great game tomorrow. Wishes!#KeralaTourism #IndiaVsWestIndies pic.twitter.com/MBgpxZXK0u

Thank you Thiruvananthapuram for this amazing welcome. #TeamIndia pic.twitter.com/eCsk4jEbXp

Arrived in Trivandrum ahead of 5th ODI vs India.
Location reminds us so much of home! #WindiesCricket #ItsOurGame pic.twitter.com/SRGSzLacKz

India, after registering their third biggest ODI win, in terms of runs, against the Windies in the fourth ODI, will look to seal the five-match ODI series on November 1.

MS Dhoni India vs West Indies 2018 Cricket India vs West Indies, 5th ODI
Get the latest updates on IPL 2020, check out the IPL Schedule for 2020 and Indian Premier League (IPL) Cricket live score . Like us on Facebook or follow us on Twitter for more sports updates. You can also download the NDTV Cricket app for Android or iOS.