India are leading 2-1 in the five-match series with one match having ended in a tie. 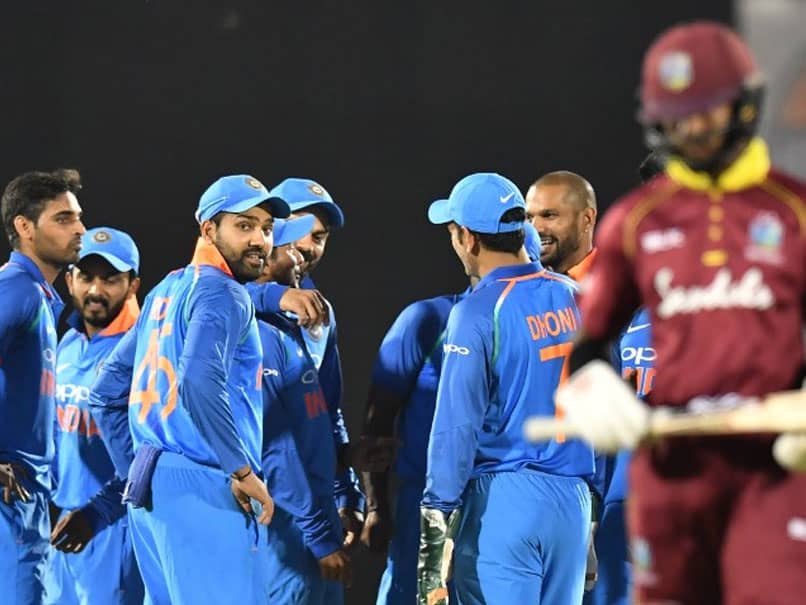 Going into the final ODI, India are leading 2-1 in the five-match series.© AFP

Virat Kohli's Team India, following their mammoth 224-run victory in the fourth One-day International (ODI) against the Windies, will aim to seal the five-match series with a win in Thiruvananthapuram on Thursday. Going into the final ODI, India are leading 2-1 in the five-match series that also witnessed a tie. With top-order batsmen Kohli, Rohit Sharma and Ambati Rayudu in good touch, the hosts look set to register their eighth straight series win over the Windies in a bilateral ODI series. The last time the Windies won was back in 2006 at home.

The weather is also expected to play a part as rain is expected to hit Thiruvananthapuram during the afternoon, which might mean that the game gets delayed or even curtailed.

However, the home team will hope to carry the momentum into the series decider in the southern city.

The last ODI played at the Greenfield International Stadium was also between the same two teams and was won by the visiting side, then an eminent force in world cricket.

Jason Holder's men will look to seek inspiration from their illustrious predecessors and level the series.

With scores of 140, 157 not out and 107 in the first three games, Kohli became the first Indian to score three consecutive hundreds in the 50-over format.

His deputy Rohit Sharma, who did not have an ODI century against the Windies before this series, now has two. His 137-ball 162 was vital to India putting up 377/5 in the fourth ODI. Rayudu seems to have solved India's No.4 conundrum for now. He scored his third hundred in ODI cricket at Brabourne Stadium in the fourth game and is looking solid.

The flamboyant Shikhar Dhawan has not capitalised on the starts while veteran Mahendra Singh Dhoni has found runs hard to come by.

Left out of the T20 squad for the upcoming series in Australia, the former India skipper will hope to make a contribution in front of the stumps, too, even though his work behind them has been stupendous.

Dhoni stands on the cusp of a milestone, needing one run to reach the 10,000 mark in India colours (he has scored 174 runs for Asia XI).

India's premier pacers, Jasprit Bumrah and Bhuvneshwar Kumar, have picked up right where they left off before the Asia Cup. They were included in the squad for the last three ODIs, and have looked reliable. The spinners have been outstanding.

As far as the Windies are concerned, Shimron Hetmyer and Shai Hope have impressed the most, having logged a century each while underlining their abilities. Captain Holder has shown he can handle the Indian spinners pretty well but the other batsmen have not covered themselves with glory.

The participation of off-spinner Ashley Nurse, who has been a consistent performer, is in doubt after he suffered an injury during the Mumbai game. His absence could affect the hopes of the Windies in the all-important game.