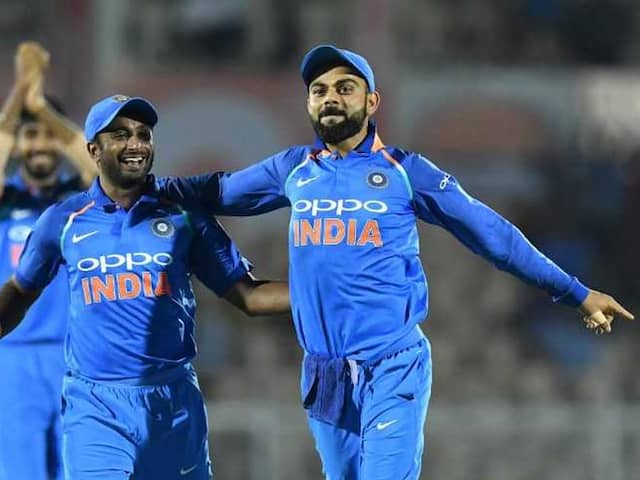 Ambati Rayudu scored his third One-day International (ODI) century during India's thumping win over the Windies on Monday. Rayudu along with Rohit Sharma (162) powered India to a mammoth total of 377/5, before the Indian bowlers dismissed the Windies out for 153 to take an unassailable 2-1 lead in the five-match ODI series. Impressed by Rayudu's knock, India captain Virat Kohli said that the team and the management are happy that someone intelligent is batting at number four. The Indian captain said that Rayudu needed to given all the support till the ICC Cricket World Cup 2019.

"Rayudu has taken his chance with both hands. We need to back him till the 2019 WC (World Cup). He reads the game well, so we are happy that someone intelligent is batting at number four," Kohli said at the post-match presentation.

Ahead of the series, Kohli had said that team management believed Rayudu was the right person to capitalise on the number four spot.

"It's about giving him (Rayudu) enough game time till the World Cup so that the particular slot will be sorted for us," Kohli had said.

Kohli also praised the effort of left-arm pacer Khaleel Ahmed, who ended the match with figures of 3/13 from his five overs.

"Khaleel was good with pitching it in the right areas, making the ball talk, and swinging it both ways," Kohli remarked.

Commenting on India's all-round show, leading the hosts to their biggest ever win over the Windies, an elated skipper said: "Yes, ticked all the boxes. Clinical game in all departments. Got into rhythm."

"We are known to bounce back and it was another example," he added.

The final ODI match will be played in Thiruvananthapuram on November 1.

Ambati Rayudu India vs West Indies 2018 Cricket India vs West Indies, 4th ODI
Get the latest Cricket news, check out the India cricket schedule, Cricket live score . Like us on Facebook or follow us on Twitter for more sports updates. You can also download the NDTV Cricket app for Android or iOS.