Ambati Rayudu scored his third ODI century while Khaleel Ahmed picked up three wickets as India took a 2-1 lead in the five-match series. 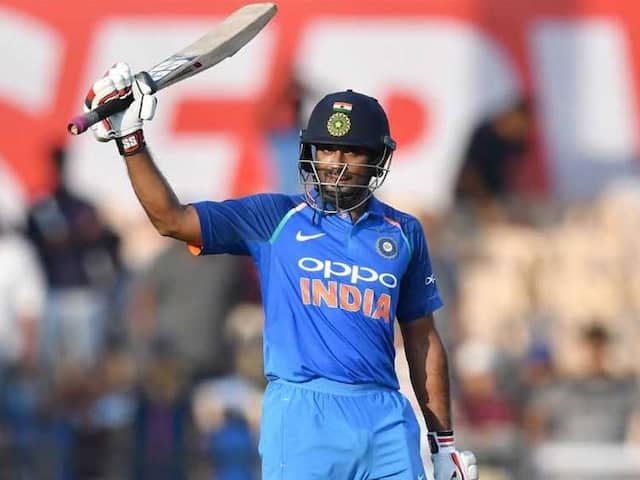 Ambati Rayudu scored 100 runs off just 81 deliveries in the fourth ODI against the Windies.© AFP

India registered an emphatic 224-run win over the Windies in the fourth One Day International (ODI) at the Brabourne Stadium in Mumbai on Monday. Rohit Sharma (162) and Ambati Rayudu (100) starred with the bat, stitching a mammoth 211-run partnership to help India post 377 for five after electing to bat. Later in the day, youngster Khaleel Ahmed (3-13) ripped apart the Windies batting order to help India bundle out the visitors for 153 in 36.2 overs. Post the clinical performance, skipper Virat Kohli lauded the combined effort of the team. The Indian captain was also effusive in his praise for Rayudu and Khaleel.

Kohli said that Rayudu has grabbed the opportunity given to him with both hands and he needs to be given all the support till the World Cup, scheduled to take place next year in England.

"Yes, ticked all the boxes. It was a very clinical game in all three departments. Something that we are very proud of and happy with the fact that we got back into rhythm. Put under pressure by Windies in the last game but we are known to bounce back and it was another example of that. Rayudu has taken his opportunity with both hands. We need to back him till that big World Cup and give him more confidence. He is feeling good about his game and he is a very confident man. He reads the game really well, so we are happy that someone with intelligence is batting at number four," Kohli said in the post-match presentation ceremony.

Speaking about Khaleel, Kohli said that the young pacer was an exciting talent and was all praise for his ability to swing the ball both ways.

"He (Khaleel) is a very exciting talent. If the pitch has something to offer, he can get the best out of it. Today, he really showed his bowling skills by moving it both ways. Pitching it in the right areas, not too full, not too short as well. I was very happy to see him pick up wickets and making the ball talk," said Kohli.

Rayudu notched up his third century during the fourth ODI. The middle-order batsman slammed eight boundaries and four sixes in his 100-run knock that came off just 81 deliveries.

Along with Rayudu, vice-captain Rohit Sharma scored his 21st century in ODIs. The 162-run knock that was laced with 20 boundaries and four sixes was Rohit's seventh 150-plus score in ODI cricket.

Two crucial run outs from Kuldeep Yadav and Kohli were also the highlights for India during the crushing win over the Windies.

After the win in Mumbai, India have taken an unassailable 2-1 lead in the five-match series. The final encounter of the series will be played at Greenfield International Stadium in Thiruvananthapuram on November 1.

Virat Kohli Brabourne Stadium, Mumbai India vs West Indies 2018 Cricket India vs West Indies, 4th ODI
Get the latest Cricket news, check out the India cricket schedule, Cricket live score . Like us on Facebook or follow us on Twitter for more sports updates. You can also download the NDTV Cricket app for Android or iOS.