It was not just Ashley Nurse's performance that caught the eye during the 3rd ODI vs India but one particular celebration of his got everyone talking. 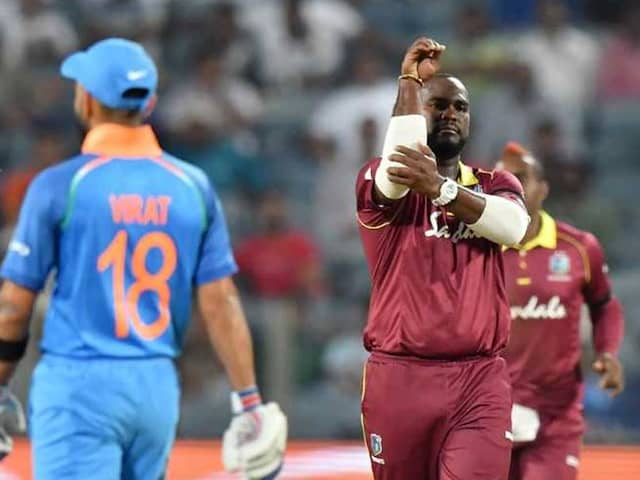 The Windies were hardly given a chance of testing India going into the One-Day International (ODI) series. The visitors were completely embarrassed during the two-match Test series with fans and cricket pundits expecting more of the same in the 50-over format as well. However, the Caribbean outfit have risen to occasion and are now tied 1-1 after three matches. On Saturday night, the Windies had quite a few heroes, one of them being Ashley Nurse, who was awarded the Man of the Match for his all-round performance in the third ODI against India. It was not just Nurse's performance that caught the eye but one particular celebration of his got everyone talking.

On the second ball of the 17th over, Nurse trapped Shikhar Dhawan plumb in front of the stumps to give Windies their second wicket.

After dismissing the Indian left-hander, the Windies all-rounder unveiled a new celebration, never-seen-before on a cricket field, the "babaji ka thullu" step.

The "babaji ka thullu" gesture went viral after Indian stand-up comedian Kapil Sharma used it in his comedy talk show 'Comedy Nights with Kapil'. However, Nurse revealed that the brains behind his celebration was his Indian friend, Sunny Sohal, whom he met during the Caribbean Premier League (CPL).

"Just dedicating the celebration to my Indian friend - Sunny Sohal, whom I met at the CPL. He told me, when you get a wicket do a 'Babaji ka thullu' or something," Nurse said during the post-match presentation ceremony.

Speaking about cricketing matters, Nurse said that he always backs himself to win games.

"I guess it was my day. I guess I played with a lot of free spirit. When Shai got out, I had to do something because the score was not that big. Sometimes you can be the hero, sometimes it can go down to zero as well. If I get a 50-50 chance to win the game, I back myself to do it."

Nurse had played a game-changing knock during the Windies innings, blasting 40 off just 22 ball to propel the visitors to 283 for nine. Before Nurse's whirlwind innings, it had seemed the Windies would struggle to even reach 250.

Those extra few runs proved to be the difference. Despite Virat Kohli's record century, his third in three ODIs, India failed to overhaul the target and fell 43 runs short.

The victory helped the Windies draw level in the five-match series. The fourth ODI will played at the Brabourne Stadium in Mumbai on Monday.

West Indies Cricket Team Ashley Nurse India vs West Indies 2018 India vs West Indies, 3rd ODI Cricket
Get the latest Cricket news, check out the India cricket schedule, Cricket live score . Like us on Facebook or follow us on Twitter for more sports updates. You can also download the NDTV Cricket app for Android or iOS.