Virat Kohli punished the South African bowling to race to the 7th double-century of his Test career and also reached the 7,000-run mark in the longest format of the game 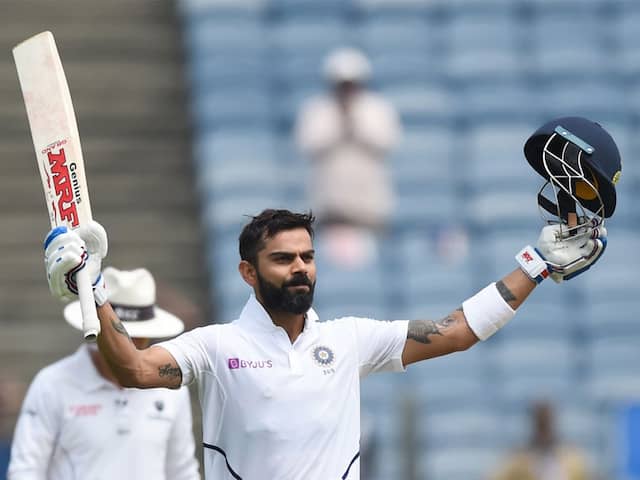 IND vs SA: Virat Kohli reached the 200-mark for the 7th time in Tests.© AFP

Virat Kohli raced to his seventh Test double-century on Day 2 of the second Test against South Africa at the Maharashtra Cricket Association Stadium in Pune on Friday. Virat Kohli put up a 178-run partnership with Ajinkya Rahane and then an unbeaten 107-run stand with Ravindra Jadeja as he reached the milestone. Kohli looked in sublime form on Thursday and remained unbeaten on 63 at stumps on Day 1 of the second Test and he carried that form into the second day. He dominated the South Africa bowling, scoring runs for fun in another record-breaking innings. He brought up his 26th Test century in the first session and then piled on the runs as he broke Don Bradman's record of most 150-plus scores as a captain.

Virat Kohli and Rahane resumed their innings on Day 2 with India's overnight score of 273 for three. Kagiso Rabada started well for South Africa, hitting the right line and length continuously to make life a little difficult for the Indian stars.

The edge of Kohli's bat was found multiple time in the morning session but all of them evaded the South African fielders. Kohli, undeterred by the few close calls, looked as eye-catching as ever with his booming cover drives and flicks off the pads on full display.

Rahane was caught behind off Keshav Maharaj on 59 but that didn't stop Kohli from keeping the runs coming. Partnered by Jadeja, who was promoted up the order, the Indian skipper kept scoring boundaries as he raced to a double ton, the second in this series by an Indian batsman.

Virat Kohli also crossed the 7,000-run mark in the longest format of the game.

Day 1 saw Mayank Agarwal slam his second century of the series, following his double hundred in the opening Test.

Virat Kohli had won the toss and opted to bat but Rohit Sharma, the twin-centurion in the previous Test, could not replicate the batting masterclass displayed in Vizag. Kagiso Rabada's fierce pace and consistency were rewarded as Rohit Sharma was dismissed on 14 in the 10th over.

Ajinkya Rahane India vs South Africa, 2019 India vs South Africa, 2nd Test Cricket
Get the latest updates on IPL 2020, check out the IPL Schedule for 2020 and Indian Premier League (IPL) Cricket live score . Like us on Facebook or follow us on Twitter for more sports updates. You can also download the NDTV Cricket app for Android or iOS.