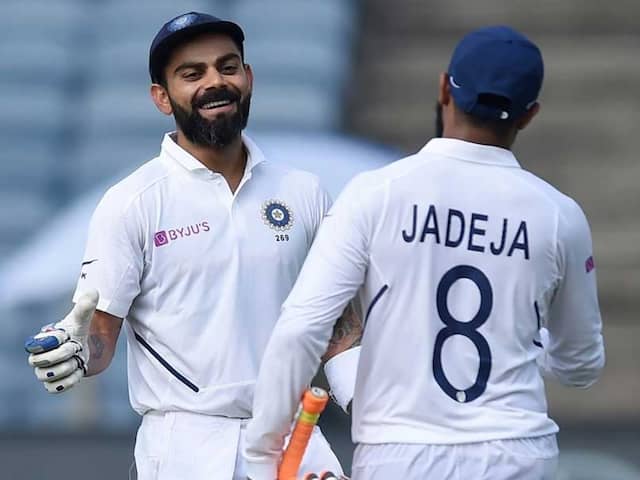 Umesh Yadav's double strike put India on top in the second Test as South Africa finished the second day at 36 for three in Pune on Friday. India declared their first innings at 601 for five with Virat Kohli unbeaten on 254. South Africa got off to a horrendous start as they lost three wickets for 36 runs. Mohammed Shami also chipped in with a wicket late in the day. Earlier, India skipper Virat Kohli struck a double century and surpassed batting great Don Bradman's Test tally of 6,996 runs in the second Test against South Africa on Friday. Kohli completed his seventh 200 in his 81st Test. He swept Senuran Muthusamy for two runs to reach the landmark and raised his bat with a smile to an ovation from the crowd in Pune. Kohli has now scored more than 7,000 Test runs at an average of over 53 since making his debut in the West Indies in 2011. The benchmark puts him in the top 50 Test run-getters, a field led by Indian icon Sachin Tendulkar with 15,921 runs in 200 matches. Tendulkar retired in 2013 with 100 international centuries across formats. Kohli has the most double hundreds among Indian batsmen, while Bradman leads the international list with 12 to his name. Playing his 50th Test as captain, Kohli has overtaken many big names in Test cricket. (SCORECARD)

South Africa Cricket Team India vs South Africa, 2019 India vs South Africa, 2nd Test Cricket Live Score Live Cricket Score
Get the latest updates on IPL 2020, check out the IPL Schedule for 2020 and Indian Premier League (IPL) Cricket live score . Like us on Facebook or follow us on Twitter for more sports updates. You can also download the NDTV Cricket app for Android or iOS.