Ravindra Jadeja smashed his 13th Test half-century after which he received a special gesture from Virat Kohli from the dressing room. 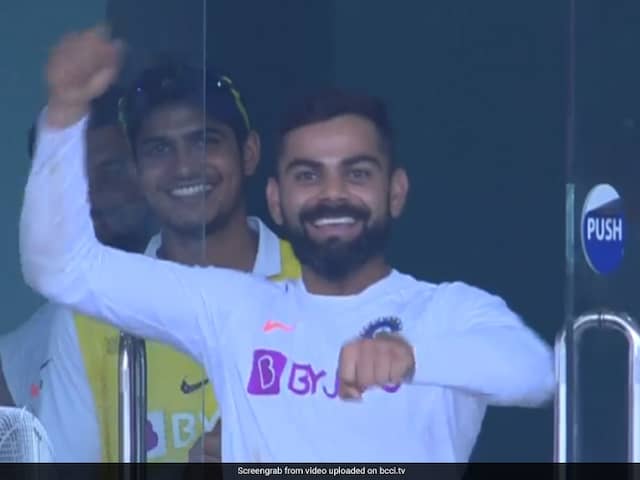 Ravindra Jadeja scored his 13th Test half-century in the ongoing third and final Test against South Africa in Ranchi on Sunday. After reaching the landmark, Ravindra Jadeja came up with his trademark sword celebration. Virat Kohli from the dressing room joined in the celebrations and added a new twist to Jadejs's sword-wielding with a horse-riding gesture. Jadeja was dismissed for 51 on the next ball after he achieved the feat as he edged one through to the wicketkeeper off George Linde.

The many moods of Captain @virat.kohli #TeamIndia #INDvSA @paytm

India, thanks to Rohit Sharma's maiden double century in Test cricket, declared their first innings at 497 for nine.

Rohit Sharma converted his sixth Test century into a double hundred as he smashed South Africa bowlers to all parts of the ground.

Rohit was well-supported by Ajinkya Rahane from the other end who went on to score his 11th Test century in the third Test vs South Africa in Ranchi.

During the latter stages of India's innings, Umesh Yadav came out all guns blazing as he smashed five sixes in his 10-ball knock of 31.

South Africa got off to a nightmare start as they lost both their openers cheaply. Mohammed Shami removed Dean Elgar for a duck while Umesh Yadav accounted for Quinton de Kock (4).

South Africa were nine for two before bad light forced the officials to take the players off the field. India were 488 runs ahead of the visitors with bad light forcing early stumps on Day 2.