Tabraiz Shamsi dismissed Shikhar Dhawan in the 3rd T20I and then pulled off his shoe, pretended to dial a number with it and put it to his ear. 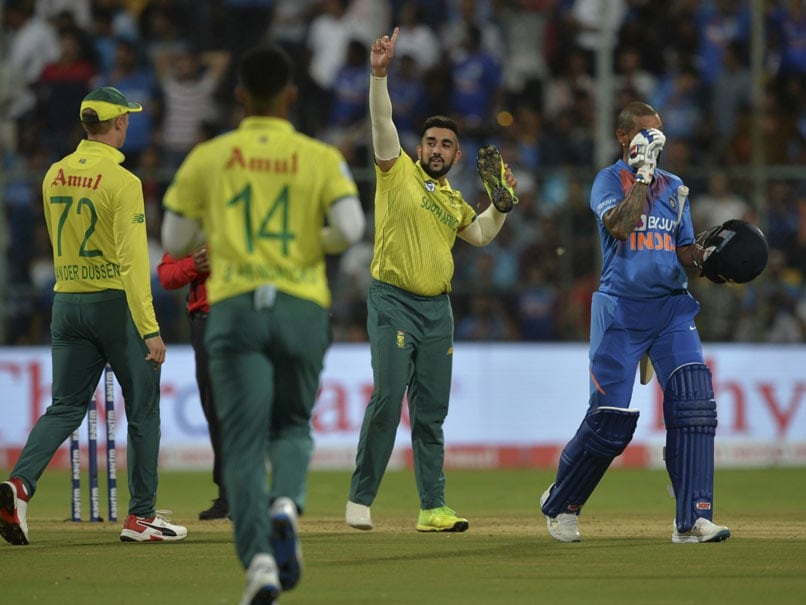 India lost the third T20 International to South Africa by nine wickets as the three-match series ended in a 1-1 draw at the M. Chinnaswamy Stadium in Bengaluru on Sunday. While newly-appointed T20 captain Quinton de Kock led South Africa from the front with an unbeaten 79-run knock, spinner Tabraiz Shamsi grabbed everyone's attention with his peculiar celebration of Shikhar Dhawan's dismissal. After removing Shikhar Dhawan in the eighth over, left-arm spinner Tabraiz Shamsi took his shoe off and acted to make a phone call with it.

The images and videos of Tabraiz Shamsi's shoe celebration went viral on social media within no time.

The 29-year-old South African spinner issued an explanation of his bizarre celebration in a tweet on Wednesday.

"No disrespect... only love, enjoyment and entertainment! Asked the big man why he didn't give me a warning atleast before smoking me out of the park 1st two balls lol," Shamsi tweeted.

No disrespect... only love, enjoyment and entertainment!

Asked the big man why he didnt give me a warning atleast before smoking me out of the park 1st two balls lol #DefinitelyWokeMeUp #GottaHaveSomeFunAtWork pic.twitter.com/wdLWN5ks9p

After winning the toss, captain Virat Kohli opted to bat at a chase-friendly venue. Shikhar Dhawan remained the top-scorer for India with 36 runs as India managed to score a below-par 134/9 in 20 overs.

Kagiso Rabada claimed three wickets for South Africa, while Bjorn Fortuin and Beuran Hendricks chipped in with two wickets each.

De Kock then smashed a 52-ball 79 to help South Africa chase down 140 with three overs to spare.

India will next face South Africa in a three-match Test series, which will start the visitor's ICC Test Championships campaign in Visakhapatnam on October 2.

The number-one ranked Indian Test team is currently on the top of the ICC World Test Championship points table with 120 points, thanks to a 2-0 Test series win over the West Indies in August.

Shikhar Dhawan India vs South Africa, 2019 Cricket
Get the latest updates on ICC T20 Worldcup 2022, check out the Schedule and Live Score. Like us on Facebook or follow us on Twitter for more sports updates. You can also download the NDTV Cricket app for Android or iOS.