India vs South Africa: The ball got stuck between boundary cushions and Vernon Philander and other fielders failed to spot it for next couple of minutes. 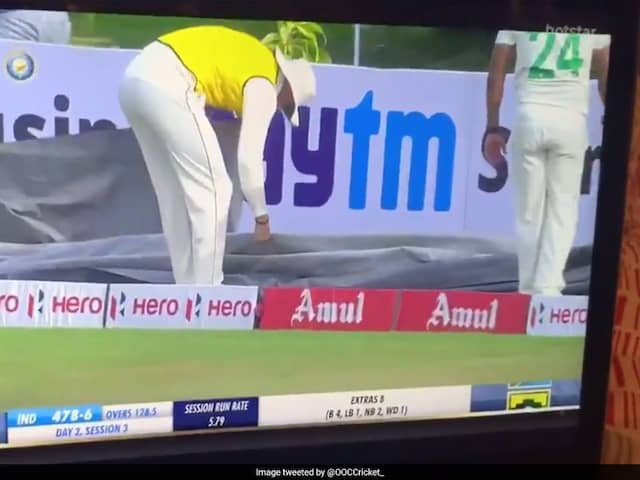 India vs South Africa: The South African players kept looking for the ball somewhere else.© Twitter

Mayank Agrawal and Rohit Sharma troubled the South African bowlers as they piled up runs with ease on Day 2 of the first Test in Vizag on Thursday. While the dominance of the Indian batsmen left the visitors frustrated, a funny incident which happened in the 129th over of the Indian innings, provided them with a comic relief. The incident occurred when South African wicket-keeper Quinton de Kock failed to collect the ball and it raced away behind him for four runs. Till now everything was normal, something which happens on the field on a regular basis but the funny part was about to follow.

After the ball reached the boundary rope, it got stuck between two advertisement cushions and the fielder Vernon Philander who was chasing the ball started looking for it beneath the covers which were placed behind the rope. For next couple of minutes he was clueless about the ball's location.

Philander was then joined in by a couple of reserve players from the bench but to no help. In fact, even one of the groundstaff members failed to spot the ball. All this while, the TV cameras showed the ball stuck between the cushions but the players had no clue whatsoever.

South African opener Aiden Markram probably saw the footage on the giant screen and came to his teammates' rescue and retrieved the ball.

Here are some of the funny reactions:

Talking about the match, India riding on prolific 317-run stand between Rohit Sharma (176) and Mayank Agarwal (215) for the opening wicket scored 502/7 decl in the first innings.

Like their bowlers, South African batsmen also let their team down when they came out to bat. Aiden Markram who was in tremendous form in the warm-up game was the first wicket to fell when he was cleaned up by Ravichandran Ashwin for five runs.

Theunis de Bruyn, in at No. 3, didn't last very long either and departed for four, becoming Ashwin's second scalp.

After losing their two main batsmen, South Africa sent Dane Piedt as a night-watchman but their move backfired after Ravindra Jadeja rattled his stumps even before he could open his account.

The visitors finished the day's play at 39/3, trailing India by 463 runs. Dean Elgar was unbeaten on 27 while Temba Bavuma was batting on two.

Aiden Markram ACA-VDCA Stadium, Visakhapatnam India vs South Africa, 2019 Cricket India vs South Africa, 1st Test
Get the latest Cricket news, check out the India cricket schedule, Cricket live score . Like us on Facebook or follow us on Twitter for more sports updates. You can also download the NDTV Cricket app for Android or iOS.