Rohit Sharma scored a fine century as opener on the first day of the first Test against South Africa at Vizag as India piled up a big total in the first inning. 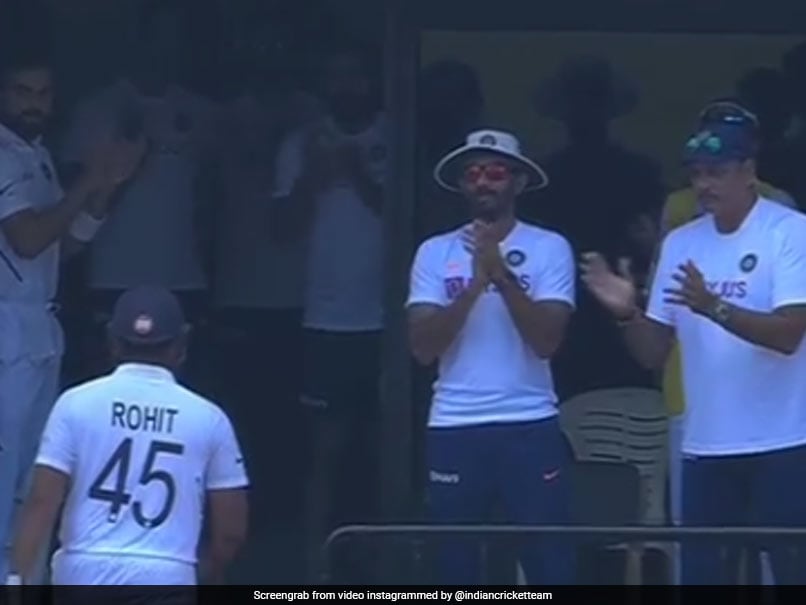 Rohit Sharma fell one run short of his Test best but impressed one and all with his score of 176 at the top of the order in the first Test against South Africa in Vizag on Thursday. Rohit Sharma opened the innings for the first time in a Test match. The limited-overs vice-captain, who is bidding to cement his place in the longest format, established a 317-run stand with his opening partner Mayank Agarwal before Keshav Maharaj gave South Africa a much-needed breakthrough in the 82nd over. As Rohit Sharma returned to the pavilion following the impressive knock, India captain Virat Kohli's gesture touched the hearts of many on Internet.

"Top knock from @rohitsharma45. The dressing room acknowledges," Indian Cricket Team captioned a video on Instagram, in which skipper Virat Kohli can be seen giving Rohit Sharma a pat on the back.

After scoring a century on the opening day, Rohit resumed his rhythm on the second day. He scored 176 runs off 244 balls with the help of 23 boundaries and six hits over the fence.

Even though India lost Rohit before Lunch on Day 2, the scoreboard looked noteworthy at 324/1 with Agarwal batting at 138 and Cheteswahar Pujara not out on six.

On Wednesday when Rohit reached the triple figures, for the first time as a Test opener, Kohli was seen applauding with high spirits.

"Opens the batting and scores a ton," Indian Cricket Team had captioned the video on Instagram.

With his first Test century as an opener and fourth overall, Rohit achieved an average of 98.22 in Tests in India. In 15 innings, Rohit has scored 884 runs, including four hundreds and five fifties.

Interestingly, Rohit's average is the joint-best among all batsmen with 10-plus innings, sharing the top spot with none other than the legendary Don Bradman, who also averaged 98.22 at home in 50 innings.