Mayank Agarwal notched up his maiden Test double-century off 358 deliveries during Day 2 of the first Test between India and South Africa at Vizag. 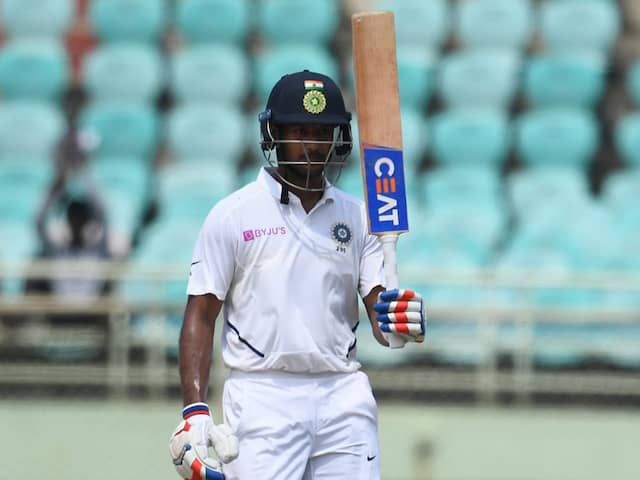 Mayank Agarwal scored his maiden Test double-century on Day 2 of the 1st Test between India and South Africa in Vizag, reaching the landmark off 358 deliveries. Mayank Agarwal scored his first double-century while featuring in his fifth Test. His 358-ball knock was laced with 22 boundaries and 5 hits over the fence. Agarwal joined Karun Nair, Vinod Kambli and Dilip Sardesai who converted their maiden century into a double-century. He had also stitched together a 317-run opening wicket stand with Rohit Sharma to put India on a dominating position. Mayank Agarwal had accumulated 275 runs from his previous four Test appearances at an average of 39.28.

Playing only his fifth Test match, Mayank Agarwal bettered his previous best knock of 77 that he scored against Australia in Sydney. Agarwal had scored 76 and 42 in successive innings of the other Test he played in Australia. However, in the recent two-Test series, Agarwal managed scores of 5, 16, 55 and 4 in four innings.

Earlier, Agarwal became the 86th player to score a century in the longest format for India.

Agarwal was dismissed for 215 runs while getting tempted to hit a juicy full toss from Dean Elgar only to find Dane Piedt at deep mid-wicket.

South Africa Cricket Team India vs South Africa, 2019 Mayank Agarwal Cricket
Get the latest Cricket news, check out the India cricket schedule, Cricket live score . Like us on Facebook or follow us on Twitter for more sports updates. You can also download the NDTV Cricket app for Android or iOS.