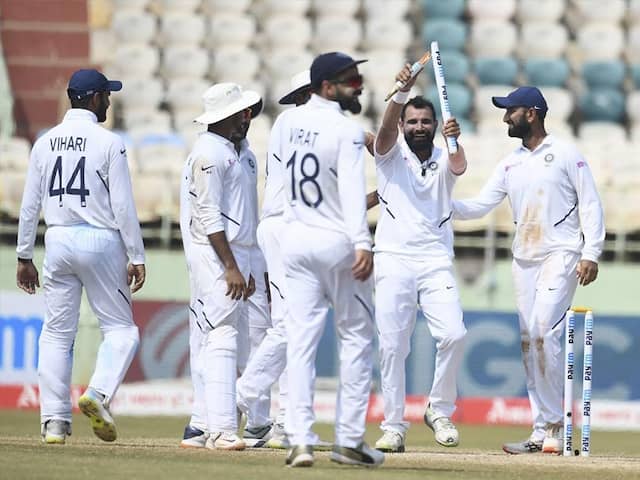 IND vs SA: Mohammed Shami starred with the ball in the second innings of the first Test© AFP

India's fast bowlers have the skills to succeed in any kind of condition, the team's bowling coach Bharat Arun said on Tuesday. Speaking ahead of India's second Test against South Africa in Pune, he said that the Indian pacers have the ability to generate reverse swing on flat tracks, which is necessary for a bowler to be successful. He said that playing domestic cricket, where the wickets are generally flat, has helped Indian quicks to develop the skills to reverse the ball.

"Our bowlers are skillful at reverse swing as when they play domestic cricket, wickets generally are flat," he told reporters. "The outfield is also not at times great. For a bowler to be successful, he needs to learn how to reverse the ball and that's where our domestic cricket contributes a lot," Arun added.

"There is definitely a chance for the pacers on any track provided they have the necessary skills, and our fast bowlers have done extremely well over the last couple of years, abroad and at home," he said.

While the performances with the bat in overseas conditions sometimes left something to be desired, the quicks impressed with their wicket-taking ability on different types of pitches.

Mohammed Shami was one of India's strike bowlers during the team's travels from last year, especially in the second innings with the ball.

Of the 58 wickets that he picked up in this period, 37 of them came in India's second innings with the ball, which constitutes a staggering 63.8%.

Bharat Arun heaped praise on Mohammed Shami for his devastating performance with the ball in the fourth innings of the first Test match in Visakhapatnam.

Shami once again starred with the ball in the fourth innings of the match. Having gone wicketless in India's first innings with the ball, he went through South Africa's batting order with a magnificent 5-wicket haul on Day 5 of the Test match.

He first bowled out Temba Bavuma, Faf du Plessis and Quinton de Kock, causing a South Africa batting collapse. He then came back to break the South Africa rearguard as he removed Dane Piedt and Kagiso Rabada as India ran out comfortable winners.

"It was a magnificent spell by Shami that put us back in the game. Otherwise given the conditions, it would have been very difficult. We were aware we needed to work really hard to get the result. On that wicket it needs lot of patience," Arun said.

"South Africa batted exceptionally well in the first innings. In the second innings, there was assistance to Shami's kind of bowling. And then he came up with a magnificent spell," he said.

The second Test of the India vs South Africa series will begin on Thursday in Pune. India lead the three-match series 1-0.

(With input from IANS)

Mohammed Shami Cricket
Get the latest Cricket news, check out the India cricket schedule, Cricket live score . Like us on Facebook or follow us on Twitter for more sports updates. You can also download the NDTV Cricket app for Android or iOS.