Shoaib Akhtar was disheartened by the current scenario of Pakistan fast bowlers but added that he is happy for Mohammed Shami. 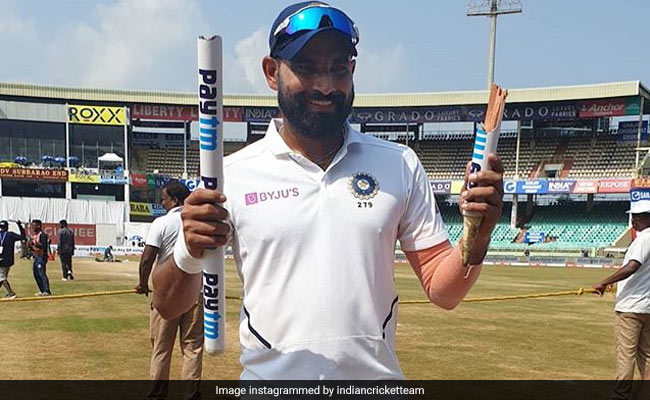 Pakistan's legendary fast bowler Shoaib Akhtar heaped praise on Mohammed Shami after the Indian seamer claimed a five-wicket haul in India's 203-run win over South Africa in the first Test in Vizag on Sunday. In a video on his YouTube channel, Shoaib Akhtar revealed that Mohammed Shami had called him for advice after India's World Cup exit in the semi-finals in the United Kingdom and he had predicted the Indian bowler's success at home at that time. However, Shoaib Akhtar was disappointed with Pakistan fast bowlers, who have not sought any advice from him.

"After India's World Cup disappointment, Shami called me up and said he was feeling sad that he could not do well for India. I told him not to lose heart but to maintain his fitness," Akhtar said.

"I told him that I want him to become an out and out fast bowler, he has a reverse swing, which is a luxury in the sub-continent, I told him you can become king of reverse swing," he added.

Akhtar was disheartened by the current scenario of his country's fast bowlers but added that he is happy for Shami.

"Now, you see what he has done, he has got wickets on a flat pitch in Visakhapatnam. I am very happy for him. Sadly, our Pakistani fast bowlers do not ask me how they can improve their bowling but the Indian bowlers like Shami are doing that. It is a sad scenario as far as my country is a concern," he said.

After declaring successive innings for 502/7 and 323/4, and bowling out South Africa for 431, India set a tough 395-run target for the visitors to chase in a day and nine overs.

Shami continued with his magical spells in the fourth innings and claimed five wickets, including four bowled dismissals, to help India wrap up South Africa for 191.

Mohammed Shami Shoaib Akhtar Cricket India vs South Africa, 1st Test
Get the latest updates on T20 World Cup, check out the T20 World Cup Schedule and Live Score . Like us on Facebook or follow us on Twitter for more sports updates. You can also download the NDTV Cricket app for Android or iOS.