Hardik Pandya and Krunal Pandya were engaged in battle in the nets ahead of the South Africa series. 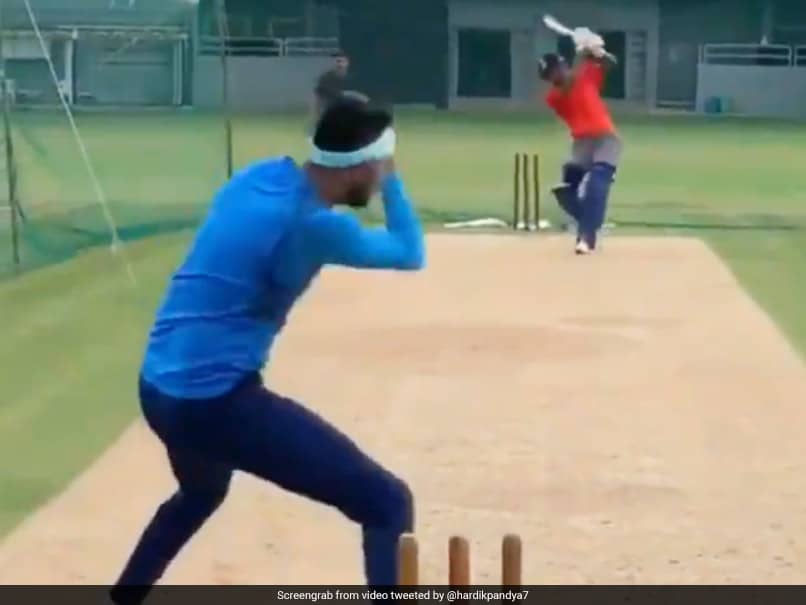 Hardik Pandya and Krunal Pandya will be donning the Indian jersey for the upcoming Twenty-20 International (T20I) series against South Africa, starting on September 15. The Pandya brothers were engaged in banter on Twitter after Hardik Pandya posted a video of him coming down the track and smashing Krunal Pandya straight down the ground. Hardik also played MS Dhoni's trademark helicopter during his time in the nets. "Pandya vs Pandya in training. I think I won that round big bro @krunalpandya24. P.S: Sorry for almost knocking your head off," Hardik tweeted.

I think I won that round big bro @krunalpandya24

P.S: Sorry for almost knocking your head off pic.twitter.com/492chd1RZh

Krunal Pandya soon answered the tweet by sharing a video of his own where the left-arm spinner can be seen deceiving the 25-year-old all-rounder.

Hahaha it's all cool bro but why didn't you upload this video? @hardikpandya7 https://t.co/90fsy4Rzqf pic.twitter.com/HuNmn51L2W

The home series against South Africa will be Hardik's first assignment after the World Cup. The hard-hitting all-rounder was rested for the tour of the West Indies where India stayed unbeaten in all the three formats.

India are scheduled to play three T20Is and three Test matches against South Africa at home. The senior selection committee had earlier announced the 15-member squad on August 29.

Virat Kohli will lead the team while Jasprit Bumrah has been rested for the T20I series after producing match-winning performance in the West Indies during India's series sweep in the Test format.

MS Dhoni, who took a sabbatical from cricket to serve time with Indian Army was not included for the limited overs leg of the upcoming home series.

The first T20I of the three-match series will be played in Dharamsala on Sunday.

Hardik Pandya Krunal Pandya India vs South Africa, 2019 Cricket
Get the latest updates on India vs England Series, India vs England , live score and IPL 2021 Auction . Like us on Facebook or follow us on Twitter for more sports updates. You can also download the NDTV Cricket app for Android or iOS.