Bangladesh beat India by seven wickets in the first T20 International to take a 1-0 lead in the three-match series at the Arun Jaitley Stadium in Delhi. 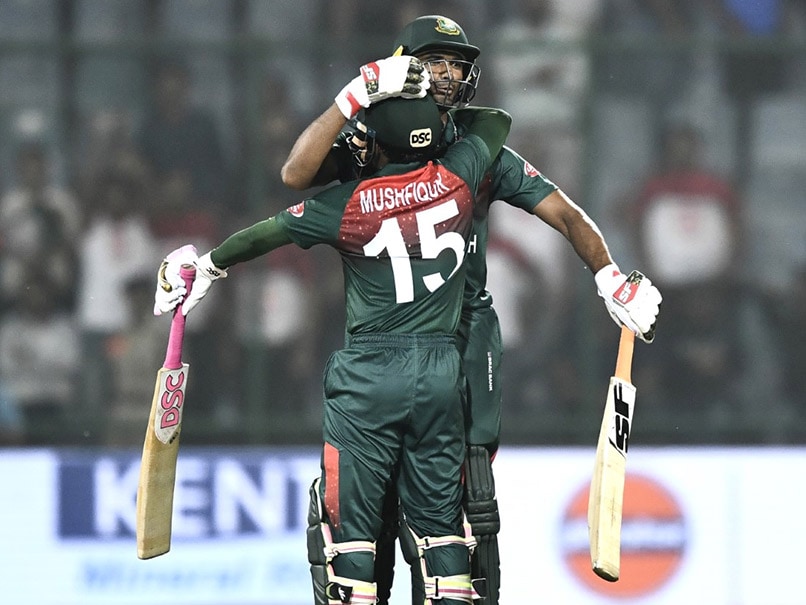 Mushfiqur Rahim scored an unbeaten half-century as Bangladesh beat India by seven wickets in the first T20 International to take a 1-0 lead in the three-match series at the Arun Jaitley Stadium in Delhi on Sunday. Mushfiqur Rahim scored 60 runs off 43 balls, including eight boundaries and a six, while captain Mahmudullah was not out on 15 after he hit the winning six for Bangladesh. This is Bangladesh's first-ever victory over India in the shortest format of the game. Bangladesh's maiden T20I win against India came in the ninth match.

Zimbabwe is the only other team that took as many matches to beat an opponent (Afghanistan) in the T20I cricket.

"We are all happy as it our first T20I win against India. 140 was a good total and they bowled well, but we managed to get over the line," Soumya Sarkar, who contributed with 39 runs, said after the match.

"We were not nervous. We were cool, calm and positive of chasing the target down. We miss Tamim and Shakib but the rest of the XI had a positive mindset," he added.

Bangladesh came on their month-long tour of India without opener Tamim Iqbal and star all-rounder Shakib Al Hasan. While Tamim pulled out of the series as his wife is expecting their second child, Shakib was handed a two-year ban (one year suspended) by the International Cricket Council (ICC) for failing to report corrupt approaches on three occasions.

Amid concerns over air pollution in Delhi, Bangladesh opted to bowl and restricted India to 148 for six in 20 overs.

Shikhar Dhawan top-scored for India with 41 runs, with the help of three boundaries and a six.

It was late blitz by Krunal Pandya and Washington Sundar, including a boundary and three sixes, that led the home team to a confident total.

Aminul Islam and Shafiul Islam took two wickets each, while Afif Hossain impressed with a caught and bowled dismissal of debutant Shivam Dube (1).

Deepak Chahar struck in the first over to derail Bangladesh's chase and got Liton Das for seven. Spinner Yuzvendra Chahal joined the party in the eighth over after dismissing Mohammad Naim for 26.

Khaleel Ahmed castled Soumya Sarkar (39) in the 17th over to keep India's hope alive. However, Mushfiqur Rahim and Mahmudullah didn't give any other chance to the Indian bowlers after that and Bangladesh chased down the target with three balls to spare.

Feroz Shah Kotla, Delhi India vs Bangladesh, 1st T20I
Get the latest updates on SA vs IND 2021-22, check out the Schedule and Live Score . Like us on Facebook or follow us on Twitter for more sports updates. You can also download the NDTV Cricket app for Android or iOS.