T20 World Cup: Asif Ali recreated MS Dhoni's 'gunshot' celebration after guiding Pakistan to a five-wicket win over Afghanistan in a Super 12 fixture at the Dubai International Stadium on Friday. 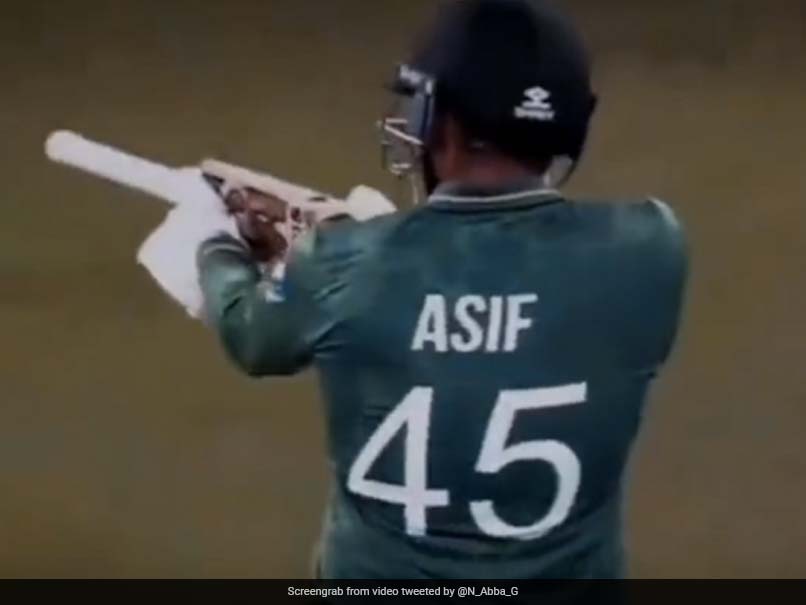 Asif Ali recreated MS Dhoni's 'gunshot' celebration after guiding Pakistan to a five-wicket win over Afghanistan in a Super 12 fixture of the ongoing T20 World Cup at the Dubai International Stadium on Friday. With Pakistan needing 24 runs off the final two overs, Asif smashed four sixes in the penultimate over, taking Pakistan over the finishing line with an over to spare. After hitting the winning runs, the Pakistan batter brought out the 'gunshot' celebration, something which former India skipper Dhoni has done a few times during his international career.

For instance, Dhoni had brought out the 'gunshot' celebration after smashing a hundred against Sri Lanka in Jaipur in 2005.

Netizens were quick to find the similarities between Asif's celebration and the one Dhoni did in 2005.

"Despite coming in to bat at a difficult situation when the required rate was already over 10, he kept his composure, even denied a single to back himself - Dhoni traits." @HindustanTimes on Asif Ali's gun celebrations. pic.twitter.com/wfbelMsd7a

Still can't decide , whether @AasifAli2018 is a gun ,or having a gun . pic.twitter.com/UTrBCJIjYt

Though Asif didn't score a century, his unbeaten knock of 25 off just seven balls helped Pakistan recover from a tricky situation.

Notably, Asif had smashed three sixes against New Zealand in the previous match, which Pakistan also won by 5 wickets.

"Asif Ali is known for this. He has played many innings in PSL (Pakistan Super League). So, I was very confident he'd get us out of any trouble we find ourselves in. I was confident pre-tournament itself that he would deliver when needed," Pakistan skipper Babar Azam said after the match.

Pakistan currently top the points table in Group 2 with three wins in as many matches. They will now take on Namibia on Tuesday, hoping to seal a spot in the semi-finals of the ongoing tournament.

MS Dhoni ICC T20 World Cup 2021 Cricket
Get the latest updates on ICC Women's Cricket World Cup 2022 and IPL 2022, check out the Schedule , Live Score and IPL Points Table. Like us on Facebook or follow us on Twitter for more sports updates. You can also download the NDTV Cricket app for Android or iOS.