T20 World Cup: India open their campaign against Pakistan on Sunday at the Dubai International Stadium. 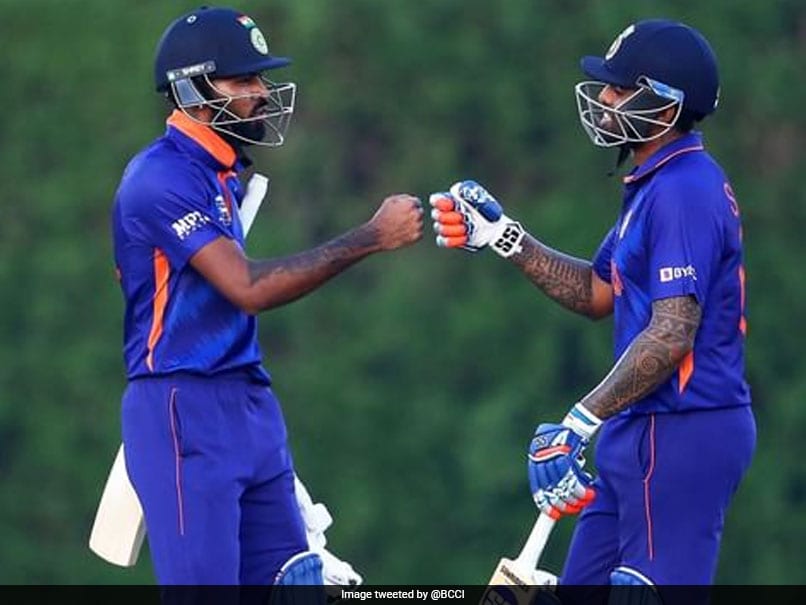 T20 World Cup: Hardik Pandya will be aiming to impress against Pakistan on Sunday.© Instagram

India and Pakistan meet in a mouthwatering T20 World Cup encounter at the Dubai International Stadium on Sunday. Both teams will be playing their first match of the tournament, and will be looking to put down an early marker. India have dominated Pakistan in World Cups be it -- ODI or T20. Having already gotten better of Pakistan five times previously in T20 World Cups, India go into the match as favourites. But Pakistan cannot be discounted. Their experience of playing in the UAE will surely play a massive role in the tournament.

In terms of squads, India and Pakistan both have balanced sides. However, India have been plagued by a selection conundrum. Hardik Pandya hasn't bowled in the longest time, and played a specialist batter for Mumbai Indians in the recently-concluded IPL 2021 with not too much success.

Will India decide to take a gamble on Hardik Pandya or will the likes of Ishan Kishan be given a chance?

Here are the players who are likely to feature for India vs Pakistan:

Rohit Sharma: The India opener didn't have the best of times in the IPL during the UAE leg. The stylish right-hander looked far from his best. He missed India's first warm-up against England but returned to captain the side against Australia, and made a big contribution with the bat. Rohit blasted 60 off just 41 balls to give India a blistering start.

KL Rahul: The stylish right-hander once again shone with the bat in the Indian Premier League, finishing only behind CSK duo Ruturaj Gaikwad and Faf du Plessis in the Orange Cap race. He impressed in the two warm-up games scoring a quickfire half-century followed by a solid 39 against Australia.

Virat Kohli:The Indian captain has been short of runs in recent times. Despite looking good in couple of matches for RCB, Virat Kohli failed to replicate his past performances. The skipper could only muster 11 runs against England and didn't bat in the second match.

Suryakumar Yadav: Like many other Indian stars, Suryakumar Yadav too struggled for runs during IPL 2021's UAE leg. But the immense potential he possesses just can't be discounted. The right-hander will be crucial to India's cause in the tournament.

Rishabh Pant: The wicketkeeper-batter has been one of the standouts for Indian cricket in recent times. Having played some momentous knocks for India in the longest format, Pant will now look to make his mark in the shortest one.

Hardik Pandya: Once indispensable, Hardik Pandya's place in the India playing XI could be in jeopardy. But he probably will get a couple of shots at proving his usefulness with the bat. But if he can't bowl throughout the tournament, he could become a liability.

Ravindra Jadeja: At the moment, Jadeja is India's number one all-rounder. He makes contributions in every facet of the game and has raised his performances with the bat in recent times. The CSK star will walk into any team in the world.

Ravichandran Ashwin: The off-spinner performed brilliantly against Australia in the warm-up match and could possibly get into the playing XI thanks to that outing. Ashwin also can be used in the powerplay overs.

Shardul Thakur: His performances with both the bat and ball helped him earn a place in the India squad despite originally not being named it. Shardul came in for Axar Patel as India named one change to their T20 World Cup.

Jasprit Bumrah: Arguably the top T20 bowler in the world, Jasprit Bumrah is a vital cog in India's bowling machinery. Virat Kohli and the team will once again count on him to get the job done in the death overs

Mohammed Shami: The right-arm pacer has improved his death bowling in recent times and that has seen him steal a march on some of the others in the team. Shami's ability to swing the ball early on makes him a potent force with the ball.

Mohammed Shami ICC T20 World Cup 2021 India vs Pakistan, Super 12 - Match 16 Cricket
Get the latest updates on ICC T20 Worldcup 2022, check out the Schedule and Live Score. Like us on Facebook or follow us on Twitter for more sports updates. You can also download the NDTV Cricket app for Android or iOS.