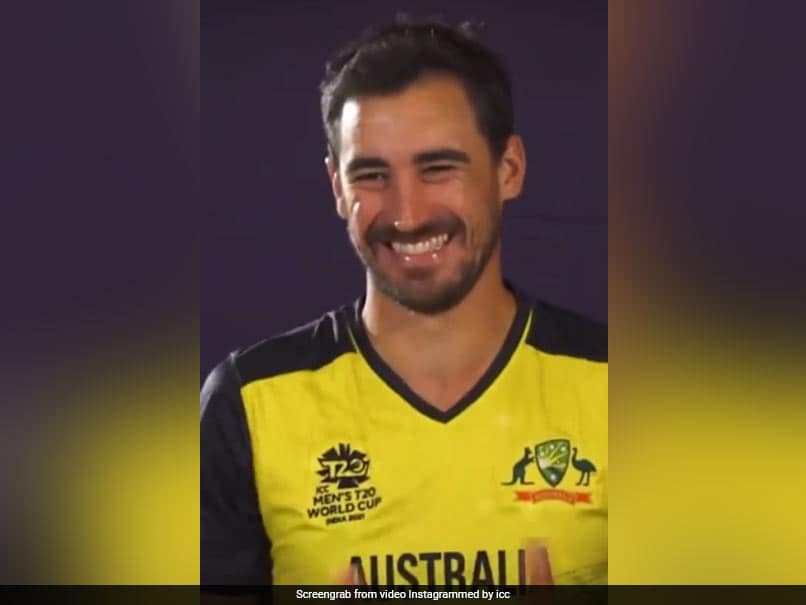 Being a modern-day cricketer is not an easy job. Not only does one have to prove their credentials on the field time and again, but also need to present themselves in front of the camera for various promotional events. Speaking in front of a camera is not easy and it was proven by ICC's latest post, featuring Mitchell Starc. Ahead of Australia's upcoming T20 World Cup Super 12 match against Sri Lanka, ICC took to social media to share a hilarious interaction with the Australian pacer, who needed four takes to say one line. The cricketer was given the task to welcome fans to the tournament but stumbled a few times before finally getting it right.

The ICC asked fans, "One line. Four takes. Not as easy as it sounds, right?"

The video begins with Starc failing right away in the first attempt and then laughing it off.

"Welcome to the ICC Men's...Try again", he quipped.

"I am Mitch Starc, welcome to the ICC Men's World.."

After the second attempt, he even received a motivational applause from the media team.

The 31-year-old failed in his third attempt too and could only utter, "Welcome to the ICC..."

It was in his fourth attempt that he finally nailed the line with a rather proud expression. "Welcome to the ICC Men's T20 World Cup", he stated.

The video was well-received by fans with many commenting with laughing emoticons.

The Aaron Finch-led outfit began their campaign against South Africa on October 23 with a win and will be aiming to maintain that run against Sri Lanka on Thursday.

Mitchell Starc Cricket Australia vs Sri Lanka, Super 12 - Match 22 Social
Get the latest updates on IND vs NZ 2021, check out the Schedule and Live Score . Like us on Facebook or follow us on Twitter for more sports updates. You can also download the NDTV Cricket app for Android or iOS.