Watch: Afghanistan's Mujeeb Ur Rahman Picks 5 Wickets In The Space Of 16 Balls vs Scotland

T20 World Cup 2021: Afghanistan spinner Mujeeb Ur Rahman rocked Scotland with a sensational spell as he picked five wickets in the space of 16 deliveries to set up a resounding 130-run victory in the 2021 T20 World Cup in Sharjah. 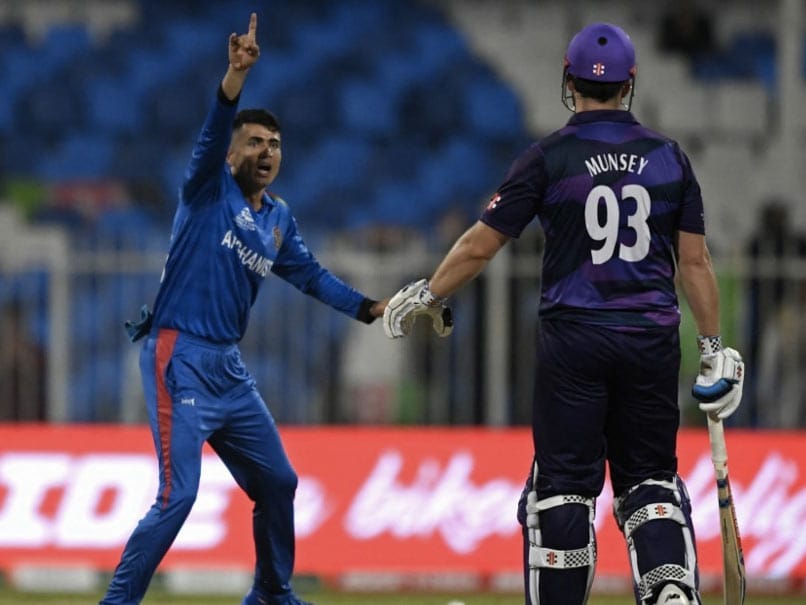 Afghanistan spinner Mujeeb Ur Rahman rocked Scotland with a sensational spell as he picked five wickets in the space of 16 deliveries to set up a resounding 130-run victory for his side in a Super 12 match of the 2021 T20 World Cup in Sharjah on Monday. Chasing a target of 191 to win, Scotland had begun well and were 28/0 after 3.1 overs when Mujeeb gave his side the much-needed breakthrough in his second over by dismissing opposition skipper Kyle Coetzer. Mujeeb's deceptive delivery was missed by Coetzer before it castled the wickets. In the very next delivery, Mujeeb trapped Calum MacLeod in front for a first-ball duck.

While the Afghan spinner didn't get a hat-trick, he got his third wicket in the same over when he removed Richie Berrington for a duck in another lbw call.

Watch the video of Mujeeb's sensational second over here:

In his next over, Mujeeb removed George Munsey for 25 to put the Afghans on the driver's seat.

The 20-year-old youngster completed his five-wicket haul in the penultimate delivery of his spell when he bowled Mark Watt to leave Scotland reeling at 45/7.

The Scots couldn't recover from Mujeeb's fiery spell and slumped to a 130-run defeat in the first match of their Super 12 campaign. Mujeeb finished with figures of 5/20 from his four overs.

Earlier in the day, Afghanistan won the toss and opted to bat first. Nabjibullah Zadran scored 59 while Hazratullah Zazai and Rahmanullah Gurbaz chipped in with knocks of 44 and 46, respectively, to help their side post a commanding total of 190/4.

Mujeeb Ur Rahman ICC T20 World Cup 2021 Cricket Afghanistan vs Scotland, Super 12 - Match 17
Get the latest updates on IPL Auction 2023 and check out  IPL 2023 and Live Cricket Score. Like us on Facebook or follow us on Twitter for more sports updates. You can also download the NDTV Cricket app for Android or iOS.