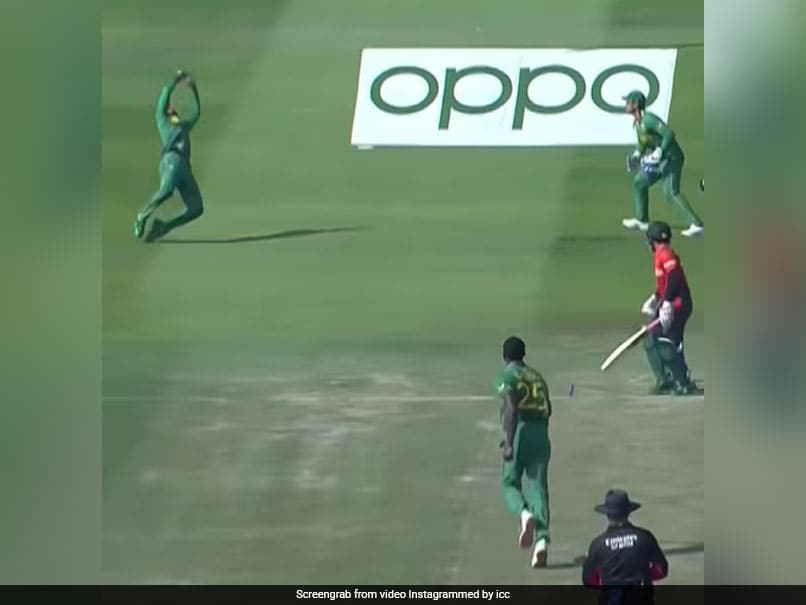 Reeza Hendricks took an incredible catch of Mushfiqur Rahim in the slips.© Instagram

South Africa bowlers put in a splendid show to bundle out Bangladesh for 84 runs in their fourth match of the ongoing T20 World Cup on Sunday. Kagiso Rabada was top-notch with the ball against the Mahmudullah-led side as the fast bowler returned with impressive figures of 3/20. Rabada dismissed Mohammad Naim, Soumya Sarkar, and Mushfiqur Rahim to break the back of Bangladesh's batting. Meanwhile, South Africa's Reeza Hendricks took a brilliant catch of Mushfiqur Rahim in the slips off Rabada's delivery. The South African pacer bowled a back of length delivery, which took Rahim by surprise as he poked at it with the bat face open. The ball flew off the face of the bat to the widish second slip region where Hendricks was placed. Hendricks put his hands up in a reflex action and the ball seemed to have stuck in his palms. Replays though showed that Hendricks actually caught the ball while in motion when he was landing on the ground.

Reeza Hendricks got to play his first game vs West Indies when Quinton de Kock made himself unavailable for selection. Hendricks played a gritty knock of 39 runs while opening the batting in the chase of 144 runs vs the Caribbean side and also featured in the match against Sri Lanka.

South Africa have won two of their three games till now in the tournament and they sit at the second spot in Group 1 points table. If they win against Bangladesh, then their chances of qualifying for the semifinals will improve.

Mushfiqur Rahim ICC T20 World Cup 2021 Cricket
Get the latest updates on IPL Auction 2023 and check out  IPL 2023 and Live Cricket Score. Like us on Facebook or follow us on Twitter for more sports updates. You can also download the NDTV Cricket app for Android or iOS.