Hockey World Cup 2018: India Toil To A Draw vs Belgium In Nail-Biting Clash

Harmanpreet Singh and Simranjeet Singh scored the two goals for the Indian team. 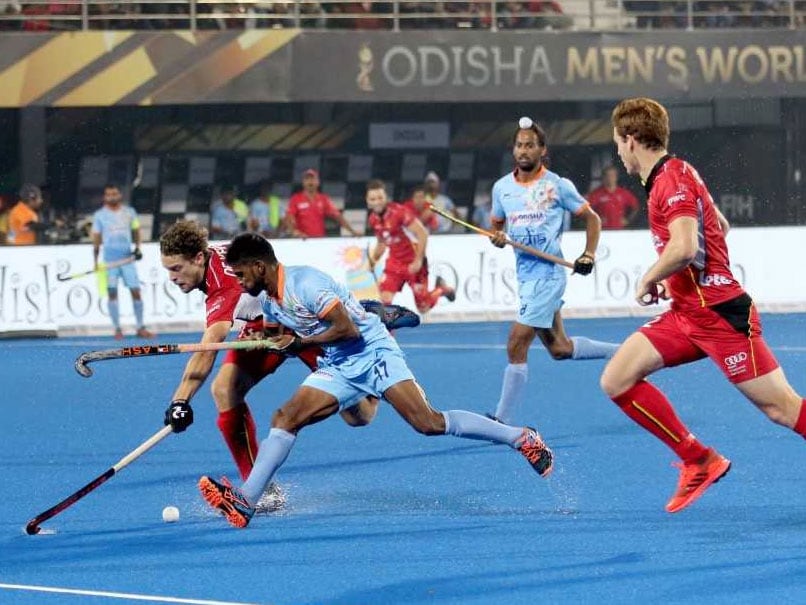 India played a 2-2 draw against Belgium in their second Pool C match of the World Cup.© Hockey India

The Indian men's hockey team displayed a brilliant effort but faltered in the end as their second Pool C match of the 2018 Hockey World Cup against Belgium ended in a 2-2 draw at the Kalinga Stadium in Bhubaneswar on Sunday. Simon Gougnard scored in the 56th minute as World No.3 Belgium avoided a scare against an upbeat Indian team, which actually started off poorly, conceding an early goal in the match. Alexander Hendrickx scored in the eighth minute via a penalty corner, giving his team an early lead.

In the second quarter, India showed signs of aggression but were tackled brilliantly by the Belgian defenders. Both the teams failed to score in this period of the match, with the match going into half-time.

Lagging 0-1 behind, India started aggressively in the third quarter. Harmanpreet Singh finally scored in the 39th minute through a penalty stroke as India drew level.

Simranjeet Singh then scored in the 47th minute, giving India a 2-1 lead in the third quarter.

In the final quarter of the match, both teams tried hard to score but the Belgian defenders kept ensured their dominance. Towards the end, Simon Gougnard produced a ferocious strike, getting past goalkeeper PR Sreejesh to draw Belgium level in the match.

In the final moments of the game, both the teams tried to score the winning goal but pressure got the better of them.

Earlier this week, India started their World Cup campaign with a 5-0 win against South Africa. The Manpreet Singh-led side had dominated 15-ranked South Africa in all the four quarters of the game.

India will play their final pool match against Canada on 8th December.