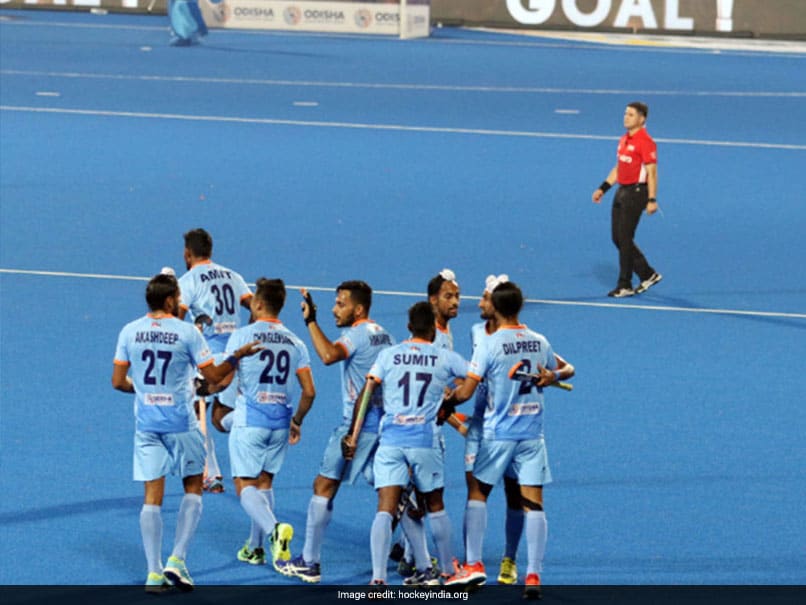 Riding on a 56th minute goal fromSimon Gougnard, Belgium played out a 2-2 draw against India in their second Pool C match of the 2018 Hockey World Cup at the Kalinga Stadium in Bhubaneswar on Sunday. Harmanpreet Singh and Simranjeet Singh scored a goal each, but that didn't help much as India were unable to win the match. The Manpreet Singh-led India started off poorly in the first quarter, letting Belgium score in the eighth minute via a penalty corner. After a goalless second quarter, the hosts started aggressively and Harmanpreet's 39th-minute goal (via a penalty) helped India draw level. Simranjeet then scored in the 47th minute, helping India gain the lead. Towards the end, the Indian defence faltered as Belgium drew their second match of the tournament. India will play their next match against Canada on December 8.

20:40 IST: Thank youfor joining us on our live coverage of the Pool C match between India and Belgium.

Pool C match between India and Belgium ends in a 2-2 draw.

20:31 IST: Final hooter from the refereeand a breathtaking encounter comes to an end. Both teams tried really hard in the final moments but failed to score winning goal. Final scoreline - India 2-2 Belgium.

20:25 IST: GOAL!Simon Gougnard scores the equaliser for Belgium. What a strike that was from Simon from just inside the circle. Brute force on that occasion from Simon. PR Sreejash had no chance in stopping that one. Just under four minutes to go now in the match. IND 2-2 BEL

20:19 IST: Just under 10 minutes to go for the final whistle!India looking much more aggressive now. They are penetrating the Belgian circle more frequently. Belgian defenders are under pressure at the moment. Can India get another one?

20:15 IST: GOAL!Simranjeet Singh his third goal of the tournament. Thanks to a brilliant pass from from Manpreet Singh and Simranjeet finishes it off with a deft touch. Goal in the 47th minute puts India in the lead. IND 2-1 BEL

20:13 IST: Whistle from the referee and fourth quarter between India and Belgium gets underway!

20:08 IST:Brilliant run from Akashdeep Singh but he fails to pass on the ball. Belgium defence is looking under pressure at the moment.

20:08 IST:India looking in control at the moment against Belgium. They have dominated with the ball possession in the this quarter. Just over 2 minutes go for the end of the third quarter.

20:02 IST: GOAL!Penalty stroke! And Harmanpreet Singh scores the equaliser for India. Varun started it all with a couple of penalty corners and Harmanpreet finishes off in style converting the penalty stroke. BEL 1-1 IND

19:58 IST:Penalty corner has been awarded to Belgium and Indian skipper has Manpreet Singh has gone in for the review. Manpreet gets it right this time. There was no foot inside the circle. The referee changes his decision.

19:54 IST: Penalty Corner for India!Brilliant run from Lalit but gets blocked by the Belgian defence. India get their first penalty corner of the match.

19:53 IST:Another brilliant attempt from the Indian team but goalkeeper Vincent Vanasch makes a brilliant save.

19:50 IST:India looking aggressive at the start of the third quarter. Brilliant run from Dilpreet Singh but Belgium defence blocks him just outside the circle.

19:49 IST: Whistlefrom the referee and India get the third quarter underway!

| LIVE | HALF-TIME in the game and both teams continue to press up and down the turf to no avail!

19:37 IST:Belgium currently leading the ball possession 68-32 at the moment against India. The home team has been aggressive in the second quarter but still haven't scored yet.

19:32 IST:Just under four minutes to go in the second quarter and India are still searching for the equaliser. BEL 1-0 IND

19:31 IST:Mandeep Singh is moving aggressively at the moment inside the Belgian half but is not finding enough support from the rest of his teammates.

19:26 IST: India now looking to attack!Dilpreet goes for the shot from a difficult angle but fails to find the net.Another missed opportunity for India.

19:23 IST: Whistle from the referee and the second quarter begins!

| LIVE | Not an expected scorecard for the first quarter!

19:21 IST:India miss out on an opportunity to equalise towards the end of the first quarter. That was was brilliant a pass from outside the circle but Manpreet Singh fails to convert it into a goal. BEL 1-0 IND

19:18 IST:Indian defence is under pressure at the moment. Another brilliant attack from the Belgians but the ball goes past the left if the Indian net. Just under three minutes to go for the first quarter. BEL 1-0 IND

19:13 IST: GOAL!Alexander Hendrickx scores the first goal for Belgium. Terrific drag-flick from Alexander and it beats PR Sreejesh. There is absolute silence in the crowd. Belgium get the early lead. BEL 1-0 IND

19:12 IST:Another referral from Belgium and they been provided with another penalty corner. Third for Belgium. Can they score this time?

19:05 IST: Another Penalty corner!And brilliant save this time from goalkeeper PR Sreejesh. Clears the ball with his right foot. Belgium attacking right from the start.

19:03 IST:Belgium looking dangerous right from the start! The powerful shot from outside the the circle and Belgium have gone for the referral. And they have been awarded a penalty corner in the first minute of the match. Can they get past the Indian defence?

19:01 IST: Whistle from the referee and Belgium get the match underway!

18:58 IST:Indian team for the match against Belgium.

Here are the 11 men who will step out on the turf to face @BELRedLions for Team India's second match of the Odisha Men's Hockey World Cup Bhubaneswar 2018.#IndiaKaGame #HWC2018 #DilHockey #INDvBEL pic.twitter.com/KTYhMP0Tfc

18:55 IST:Both teams are out in the middle along with the match officials for the national anthems.

18:40 IST:The atmosphere for the Canada vs South Africa was electrifying and it's getting even better at the Kalinga Stadium!

Our next challenge at the Odisha Hockey Men's World Cup Bhubaneswar 2018 will be @BelRedLions, who've been bolstered by a win in their last match.

18:32 IST: Final Hooterand the match between Canada and South Africa ends in a draw. Final scoreline RSA 1-1 CAN

| LIVE | It is a draw here but what character shown by both @FieldHockeyCan and @SA_Hockey_Men all through the game. Makes any hockey fan proud!

18:28 IST:Here's what Sports Minister Rajyavardhan Rathore has to say ahead of the start of India vs Belgium match.

Sending my best wishes to the @TheHockeyIndia for their upcoming match against Belgium. May your #hockey sticks rule the field, may your game sweep us off our feet! Go India Go #INDvBEL #IndiaKaGame #HWC2018

18:21 IST:We are just five minutes away from the final whistle and both teams are desperately looking for the lead.

18:12 IST:Fourth and final quarter of the match between Canada and South Africa has begun. After this, hosts India will be up against Belgium in their second match of the tournament.

| LIVE | The most exciting quarter of the game has ended!

18:08 IST: GOAL!Canadian skipper Scott Tupper scores the equaliser for Canada through a penalty stroke. RSA 1-1 CAN

18:07 IST:With just seconds to go in the third quarter, Canada have earned a penalty stroke. Will the manage to score the equaliser?

18:01 IST: GOAL!South Africa have finally scored the opening goal of the match in the 43rd minute. Nqobile Ntuli finds the back of the Canada net with a reverse flick. RSA 1-0 CAN

Ntuli opens the account for his team in the 43rd minute of this game at OHMWC Bhubaneswar 2018 on 2nd December. #CANVRSA #IndiaKaGame #HWC2018 #DilHockey pic.twitter.com/gz8kfDOEKj

17:50 IST:Before India match starts at 19:00 IST, Canada and South Africa are currently playing the other Pool C clash. In the third quarter, both teams are still striving to get score their first goal.

17:48 IST:Its Day 5 of the tournament and we have two matches lined up for today. Currently, Canada and South Africa are up against each other in the third match of Pool C.

17:45 IST: Hello and welcome to the live match updates of the Hockey World Cup 2018 match between India vs Belgium.

The hosts produced a fine display of attacking hockey to outclass South Africa and would look to continue in the same vein, although consistency is something India has always lacked. Come Sunday, the Indians will have to be at their best in all departments to get the better of the ever-improving Red Lions, who will be out to prove a point after a not-so-impressive opener.

The Indian forward line comprising Mandeep Singh, Simranjeet Singh, Akashdeep Singh and Lalit Upadhyay impressed against South Africa. While Simranjeet scored a brace, all three other strikers struck a goal each. The Manpreet Singh-led midfield and the backline too did a decent job the other day but defenders Harmanpreet Singh, Birendra Lakra, Surender Kumar and goalkeeper P R Sreejesh will have to be on their toes against the attacking Belgians. World number five India would also look to better their head-to-head record against Belgium.

Since 2013, both teams have played against each other on 19 occasions with India registering five wins as against Belgium's 13. One ended in a draw.

The last time the two teams played each other was in the final edition of the Champions Trophy earlier this year in Breda, Netherlands where India conceded a late goal to settle for a 1-1 draw. The magnitude of a World Cup match is different and both teams are aware that a single mistake can ruin their hopes and aspirations.

Comments
Topics mentioned in this article
India Hockey Live Blogs
Get the latest updates on IPL 2021, check out the IPL 2021 Schedule and Indian Premier League Live Score . Like us on Facebook or follow us on Twitter for more sports updates. You can also download the NDTV Cricket app for Android or iOS.