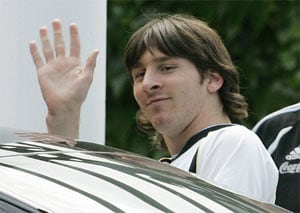 For thousands of years, Americans lived around the Mississippi, as hunters and gatherers but it wasn't until the European invasion that they realised its importance. The story of Indian football is not too different.

For thousands of years, Americans lived around the Mississippi, as hunters and gatherers but it wasn't until the European invasion that they realised its importance. The story of Indian football is not too different.

Footballers in the country for decades, have scavenged on the ruins of cricket and in consequence have only managed to pick up the laurels that would not be in the agenda of most teams.

Football held a distant corner in all our hearts, until of course the European arrived; in this case, it is a South American but only by nationality.

The Argentine forward is set to give Anna Hazare some competition in terms of head-count at Salt Lake and my bet is that the effect will be equally convincing.

You have to be a Madrid fan not to appreciate Messi and more often than not, soccer conversations in social outings may just be your nightmare. But if you have admitted the man's greatness, then you would have never craved for the Saundesh more.

we all have been Mess-merised even if we want to act unimpressed, but this time I'll just wait for his boots to do the talking. Like all good things just happen, almost subconsciously, this one too will prove its worth.

Never has a football match seen such chatter in the country and I really hope this is not the last time it happens. It is not an opportunity to predict a rising future, but is certainly an opening which can make way for big things for the sport.

And just as misfitting it has been throughout, my mind recalls the most famous words of my good friend Inzy, "Inshallah, the boys do really well".

Comments
Topics mentioned in this article
Football Lionel Messi Neymar
Get the latest updates on IPL 2021, IPL Points Table , IPL Schedule 2021 , live score . Like us on Facebook or follow us on Twitter for more sports updates. You can also download the NDTV Cricket app for Android or iOS.