Brazil made a winning start to the Copa America on Friday with a 3-0 victory over Bolivia in the absence of superstar Neymar. 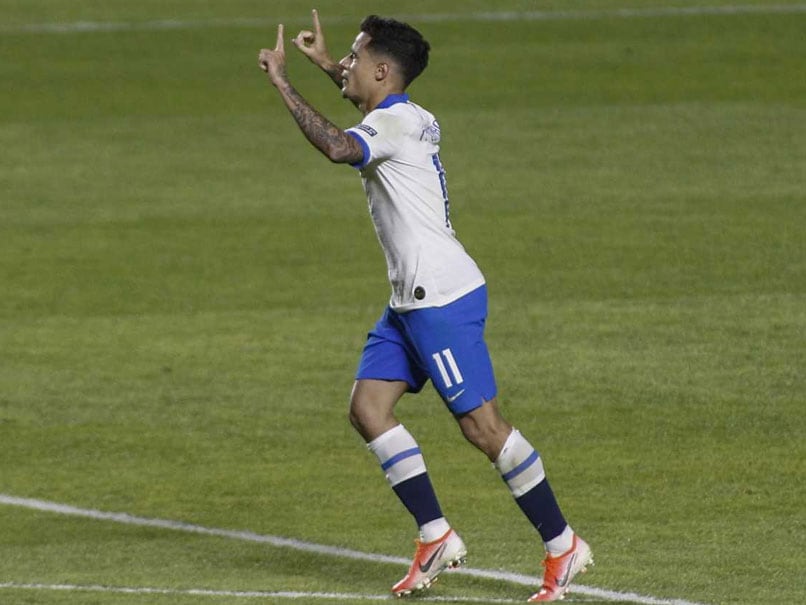 Brazil made a bright start and predictably dominated the early possession and chances.© AFP

A brace from Philippe Coutinho handed hosts Brazil a winning start to the Copa America on Friday in a 3-0 victory over Bolivia as the absence of superstar Neymar was quickly forgotten. Barcelona's Coutinho scored from the penalty spot early in the second half and added a close-range header three minutes later. Substitute Everton netted a sensational third five minutes from time to clinch a Group A victory for coach Tite's tournament favorites in Sao Paulo. The build-up to the competition had been dominated by Neymar's woes, firstly when he was accused of rape by a Brazilian model, and then when he damaged ankle ligaments in a friendly last week, forcing him out of the Copa.

If Brazil's first half performance was anything to go by, the Paris Saint-Germain star was sorely missed, but Coutinho's brace at least silenced the jeers that met the team at half-time.

"Whistles are part of the game, the fans want us to win and play well, so that's why they jeer," said the match-winner, whose goals papered over the cracks of an at times disjointed performance.

"We always want their support but we're focused on the objective, which is the match," Coutinho told Brazil's SportTV.

"Whistles or cheers, the important thing is to stay focused and get the win."

Brazil made a bright start and predictably dominated the early possession and chances.

But surprisingly their greatest threat came from set-pieces with Coutinho's corner delivery causing panic in the Bolivian backline.

Bolivia's goalkeeper Carlos Lampe made an instinctive block from a Roberto Firmino flick that came straight at him.

And a few minutes later, towering center-half Thiago Silva was left unmarked eight yards out to meet another Coutinho delivery, but he inexplicably headed well wide.

The pitch at the Morumbi stadium wasn't helping flowing football, with Bolivia in particular struggling to string passes together.

"We've got to be honest, Brazil beat us and beat us well," said Bolivia coach Eduardo Villegas.

Their best chances came from Bolivian mistakes and Richarlison should have scored into an open goal when a woeful Lampe clearance went straight to him, but the Everton forward failed to lift the ball over defender Adrian Jusino, who headed clear from the edge of the 18-yard box.

With 10 men behind the ball, Bolivia were proving hard to break down but Casemiro went close with what appeared to be a shanked cross that drifted just beyond Lampe's far post with the goalkeeper scrambling to cover it.

Tite's team were treated to a barrage of jeers from the 67,000 crowd when the half-time whistle went.

Bolivia's best moment had perhaps been a cheeky nutmeg of Casemiro by Raul Castro on the edge of his own 18-yard box. It had been slim pickings.

Fans' spirits were quickly lifted after the restart, though, as Coutinho fired home from the spot on 50 minutes after a contentious penalty award.

Richarlison's attempted cross struck Jusino's arm, which was by his side and only slightly away from his body, but after consulting the video assistant referee, Argentine handler Nestor Pitana pointed to the spot.

Bolivia were stunned and just three minutes later their defence went missing as Firmino reached the bye line and chipped the ball to the back post for Coutinho to head home from barely two yards out.

Reluctant to push men forward, Bolivia never looked like getting back into the match.

"If you want to qualify (for the knock-out stages) you have to attack a little more," admitted Villegas.

And Coutinho's corners continued to present Brazil with their best chances, as Marquinhos headed straight at Lampe from seven yards with 15 minutes left.

The game had slowed to almost walking pace when substitute Everton scored a sensational third, cutting in from the left wing before firing an unstoppable shot into the far corner with Lampe rooted to the spot.

Brazil Neymar Philippe Coutinho Football
Get the latest updates on ICC T20 Worldcup 2022 and CWG 2022 check out the Schedule, Live Score and Medals Tally. Like us on Facebook or follow us on Twitter for more sports updates. You can also download the NDTV Cricket app for Android or iOS.