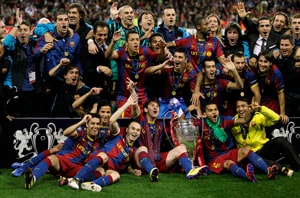 It's always a pleasure to watch the top two contenders make it to the final and then for the best man to walk away with the ultimate prize. Of course to be able to really enjoy that we have to first be able put aside our biases, as a contest between the best is always a mouthwatering prospect but a hell lot of a times it comes at the expense of one's own preferred candidate.

Now this candidate could be anyone from the several men competing to woo and marry the lone girl in 'The Bachelorette' or our favourite clubs in contention for the biggest glory in club football - the UEFA Champions League. I know many would scoff at the above comparison, some even wanting to kill me, but don't worry I have my heart (and brain) in the right place and I, don't watch the show. That was only for people for whom sport and more importantly football, is gibberish.

I, for one, decided to put aside my preference for Chelsea and relish the Wembley final between Barcelona and Manchester United even though the latter is a team I'm not too fond of. Well, that, is without a doubt an understatement. Of course, the fact that Barca is another favourite of mine made it much easier to do so.

It is a privilege to watch this Barcelona team and people whose love for the game can rise above their love for their favourite teams would have little hesitation in admitting as much. Likewise it was a privilege to witness Barca dismantling United in one of the best finals in recent memory. A Man U supporter watching the contest beside me seemed a changed man after the game and had little shame in admitting to the fact. His words: "I have nothing but respect for Barca." Yes, he wasn't alone. Barca succeeded in doing something next to impossible - making several Man U fans accept that they lost to a better team. That, mind you, is no small feat as they are known to be arrogant and have little respect for other clubs' fans. This is one reason why most other club supporters join hands in rooting for the team in contention against Man U once their own team is out of the contest.

Many describe this Barcelona team as the greatest team ever and while that may be arguable, it isn't a far-fetched opinion either. For those who turn to football once in every 4 years only to follow the FIFA World Cup, the Barcelona team is quite similar to the Spain side that won the 2010 Cup. That by the way is hardly a surprise as about 3/4th of the first team players in the Spanish line-up also form the core of the Barcelona team. But, Barcelona have something even Spain didn't - Lionel Messi. No, I'm not one of those who believes the Spanish champions are all about Messi. While the Argentinean has undoubtedly been at the centre of Barcelona's success, he hasn't been the lone architect of the Catalan club's current golden chapter. And, by that I do not mean to undermine Messi's influence but to bring up others equally vital contribution.

Barcelona, quite like Spain did with Germany, stifle their opponents for possession with their quick and precise passing. This was evident against United, who surrendered the possession after making a bright and pacy start to the game. Although Barca were forced on to the backfoot early on in the game, they caught up soon and from then on dictated the pace, possession and path of the game.

Many joke that the ball has to pass between Xavi and Andres Iniesta at least 10 times before it can even make its way to another person and sometimes it seems like these both are playing among themselves. In short, the Catalan Giants with these geniuses at the heart of their midfield, control the bulk of possession and by that the game. They are completely in sync and seem to even be able to read each others minds, latching on to backheel passes, blind moves and whatever else is passed around.

There are many goals that have the stamp of Messi magic with the forward effortlessly dribbling past several defenders to score single-handedly, but there are even more where he has been spoon-fed by beautiful, precise, defence splitting passes by the men from the midfield.

Barcelona are the best team in the world, at least currently even if not in the history, and this fact would not have changed even if they had lost the Champions League title clash to Man United. Thankfully, they have only reaffirmed the point by lifting the European Cup, twice in the last 3 years - both times getting the better of United, the only team that even looks capable of posing a serious challenge to the masters of football.