Saha was not picked for the upcoming Test series against England but the board did not reveal the full extent of his fitness problems. 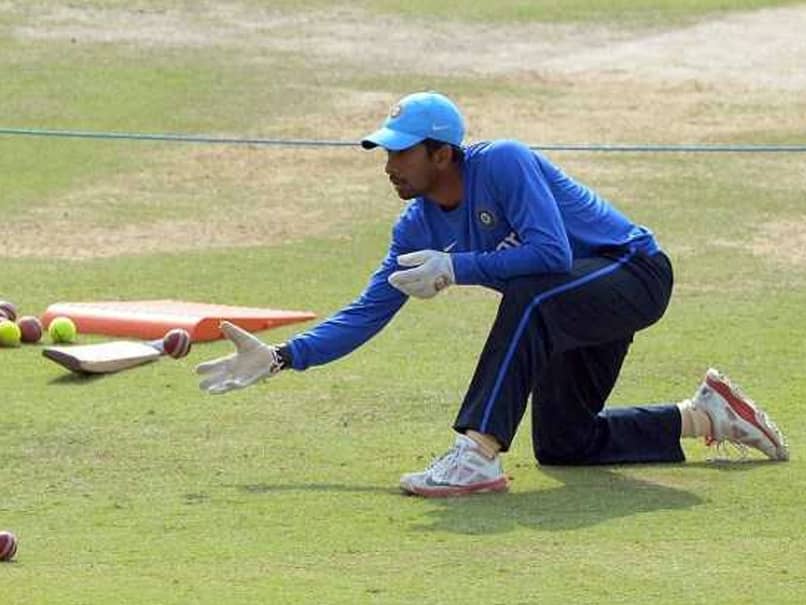 Saha sustained shoulder injury on May 7 and was again given ultrasound injections in Delhi.© AFP

"The labral repair surgery will be done by Dr. Lennard Funk in Manchester, UK. The entire course of treatment and consultation that was carried out at the NCA was performed in co-ordination with the India Team management and the GM of Operations," it added.

Saha was not picked for the upcoming Test series against England but the board did not reveal the full extent of his fitness problems.

The BCCI said in its defence, "The entire course of treatment and consultation that was carried out at the NCA (National Cricket Academy) was performed in co-ordination with the India Team management and the GM of Operations."

The BCCI timeline raises questions about how the entire issue was handled by the Cricket Operations team led by Saba Karim (General Manager).

"Saha reported at the NCA on January 29 with left proximal hamstring tendinopathy (pain in the upper left hamstring). Simultaneously he complained of right shoulder pain. Subsequently an MRI scan was done in February which revealed a Labral tear," it stated.

It means the first shoulder injury was sustained in January, which the BCCI ultimately revealed in July. None of the NCA officials want to come on record.

The timeline states that after taking injections and a rehab of close to six weeks (standard time taken for healing of labral tear), Saha was declared fit on March 19, just two and half weeks before the IPL started.

As per the release, Saha once again sustained shoulder injury on May 7 and was again given ultrasound injections in Delhi. He was rested for five IPL games.

"During this period, on 15th of May, Saha requested to visit the NCA head physiotherapist, Ashish Kaushik, so that he could also review his right shoulder. Ashish assessed his right shoulder and concluded that its presentation was similar to how it had been in late January/early February.

The next question left unanswered is if Kaushik assessed that Saha's condition was "similar to what it was in January and February" (when he first time sustained labral tear), how come Sunrisers Hyderabad or the BCCI allowed him to play the IPL game on May 25.

How did his condition improve drastically in 10 days if it was similar to the phase in January-February? A senior BCCI official, when asked, said, "Your guess is as good as mine."

As per the timeline, Saha's thumb injury had healed on July 2 as per X-ray report.

As per the BCCI timeline, an appointment was then fixed with Dr. Dinshaw Pardiwala, an orthopaedic surgeon at Mumbai's Kokilaben Ambani Hospital, on July 6.

"Pardiwala opined that another steroid injection would assist Saha's recovery. He also stated that should the injury not respond to the injection, then surgery would be necessary.

"Post the injection, after observation and rehabilitation for five days, when his condition had not improved, he was declared unfit on the 13th of July and the India team management was informed of the same," the BCCI stated.

But on July 18, when BCCI released the squad for first three Tests, there was no mention about what exactly was Saha's injury.

Funnily enough, chief selector MSK Prasad had gone on record stating that Saha was yet to recover from the thumb injury when it was not the case actually. Either he was unaware or the NCA and Cricket Operations team chose to keep the chairman of selectors in the dark or he deliberately hid information from the media.

Wriddhiman Saha England vs India, 2018 Cricket
Get the latest updates on IPL 2020, check out the IPL Schedule for 2020 and Indian Premier League (IPL) Cricket live score . Like us on Facebook or follow us on Twitter for more sports updates. You can also download the NDTV Cricket app for Android or iOS.