India captain Virat Kohli mocked Joe Root after running out the England captain on the opening day of the first Test at Edgbaston. 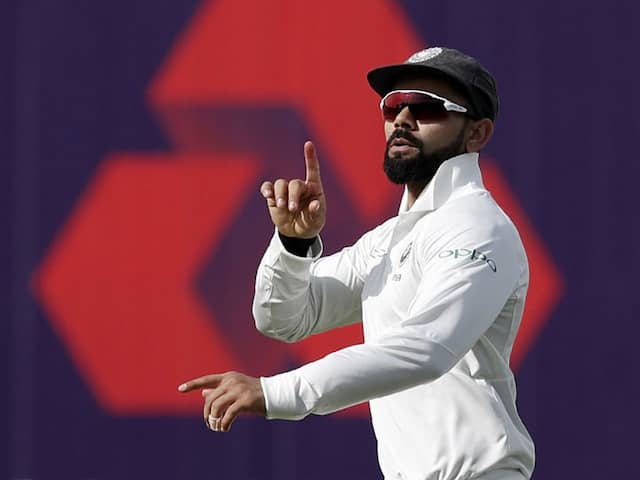 Virat Kohli mocked Joe Root after running out the England captain on Day 1 of the first Test.© AFP

India captain Virat Kohli mocked his England rival Joe Root after running out the England captain on the opening day of the first Test at the Edgbaston cricket ground in Birmingham on Wednesday. England were 216 for three when Virat Kohli's magnificent direct throw sent Joe Root packing for 80 runs. Just after the run-out, Kohli mocked Root by blowing a kiss and mimicked his 'mic drop' celebration. Kohli's 'mic drop' gesture was the imitation of Root's celebration during the one-day series against India two weeks ago.

England were on course for a substantial first-innings total when Root and Jonny Bairstow shared a fourth-wicket stand of 104 runs.

But his 11th Test fifty without a hundred ended in frustrating fashion after a run out involving Bairstow.

Root's run out sparked an England collapse against India on Day 1 at Edgbaston. At stumps, England were 285 for nine in what is their 1000th Test.

Sam Curran (24) and James Anderson (0) were at the crease when umpires dislodged the bails for the day.

England's Keaton Jennings tried to defuse any potential bad feeling by saying: "Everybody is entitled to celebrate how they want to.

"He (Kohli) celebrated, and that's cool," the opening batsman added.

Joe Root England vs India, 2018 Cricket Edgbaston, Birmingham
Get the latest Cricket news, check out the India cricket schedule, Cricket live score . Like us on Facebook or follow us on Twitter for more sports updates. You can also download the NDTV Cricket app for Android or iOS.