Anushka Sharma Poses With Team India. Twitter Lashes Out At Cricket Board

The Indian cricket team, who are currently playing a five-match Test series against England, were hosted by the High Commission of India in London on Tuesday. 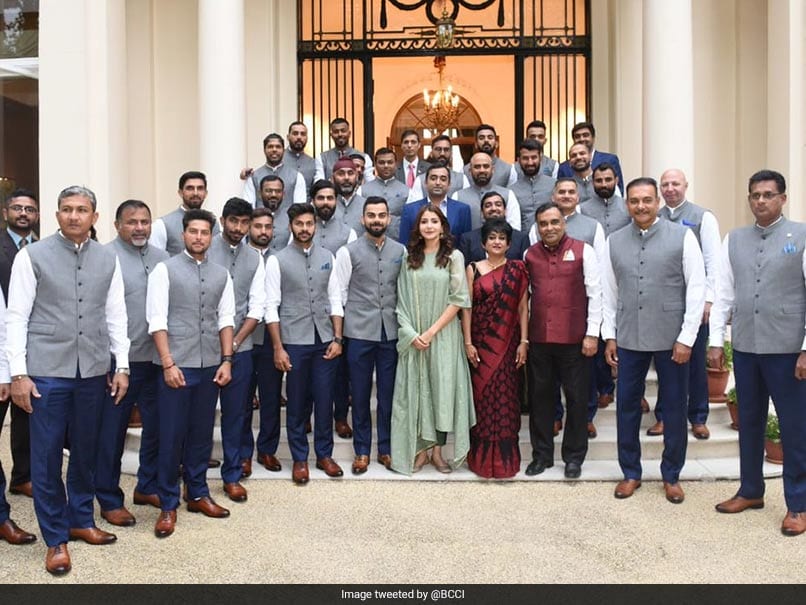 Anushka Sharma was also spotted in the stands during the series opener at Birmingham.

Virat Kohli and Anushka Sharma have managed to grab social media's attention yet again. The High Commission of India in London hosted the Indian team on Tuesday with captain Kohli's wife Anushka also in attendance at the gathering. It is however, yet unclear as to how the Bollywood actress is still travelling with Kohli and the team as the Board of Control for Cricket in India (BCCI) had barred the wives and girlfriends of the Indian players from accompanying their respective partners until the end of the third Test against England.

#TeamIndia members at the High Commission of India in London. pic.twitter.com/tUhaGkSQfe

The presence of the Bollywood actress in the picture saw a lot of divided opinions on the Internet.

Some people criticised her for getting special treatment since she was allowed to attend the official event while the families of other cricketers have reportedly been asked by the BCCI to stay away till the third Test, while others didn't see anything wrong with it.

Why @BCCI allows someones wife at official tour.... Please confirm Is your team mens are at work or on honeymoon

Why is Anushka here lmao?
She is at the center while the vice captain is at the end lol whatta joke

why is anushka sharma there? she's not a part of team india. this isn't acceptable

@bcci has lost the little credibility it had after posting this picture!

Sir, The problem here is that bcci has banned family members after the test series started. Why special privileges to someone?

Anushka was also spotted in the stands during the series opener in Birmingham.

On the work front, Kohli's Team India lost the first Test of the five-match series against England at Edgbaston by 31 runs as the skipper's valiant effort went in vain.

The visitors, who are trailing 0-1, will look to make things even when they take on the hosts in the second Test slated to be played at the Lord's Cricket Ground, starting Thursday.

Virat Kohli England vs India, 2018 Cricket England vs India, 2nd Test
Get the latest updates on IPL 2021, IPL Points Table , IPL Schedule 2021 , live score . Like us on Facebook or follow us on Twitter for more sports updates. You can also download the NDTV Cricket app for Android or iOS.