Kohli's 22nd Test century and his 200-run tally in the Edgbaston Test has vaulted him to the top of the ICC Test rankings for batsmen. 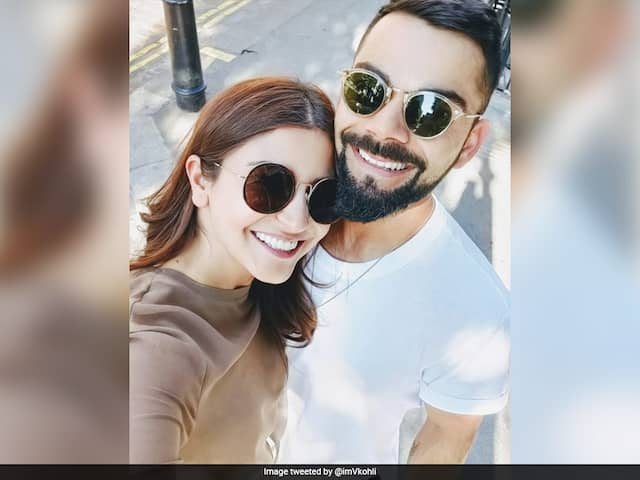 Anushka was seen clapping and smiling for her husband from a VIP stand at Edgbaston.© Twitter

International Friendship Day is upon us and it is the perfect time to appreciate the contributions of friends in our lives. On the day designed to foster friendships, Team India skipper Virat Kohli took to Twitter and posted an adorable selfie with his Bollywood actress wife Anushka Sharma and validated the fact that friends make the best life partners. The celebrity couple has been a constant source of inspiration for each other and has never shied away from expressing their affection on social media. The 30-year-old actress also posted the same picture on her Twitter handle and wished her cricketer husband.

Earlier this week, Kohli hit his maiden ton on English soil during the first Test against England. When he finally reached the century, the 29-year-old reached for his marriage ring which was attached to a chain around his neck and kissed it. He then proceeded to blow kisses towards the gallery where Anushka was seated.

Anushka was then seen clapping and smiling for her husband from a VIP stand at Edgbaston.

Kohli scored 51 runs in the second innings but his effort went in vain as the visitors fell short by 31 runs.

Kohli's 22nd Test century and his 200-run tally in the Edgbaston Test has vaulted him to the top of the ICC Test rankings for batsmen.

He has dethroned Steven Smith, the former Australia captain, and is the first Indian to be No. 1 since Sachin Tendulkar in June 2011.

After losing the series opener, Kohli's Team India will be up against England for the second Test that is slated to begin on Thursday at the iconic Lord's Cricket Ground.

Virat Kohli England vs India, 2018 Cricket England vs India, 2nd Test
Get the latest Cricket news, check out the India cricket schedule, Cricket live score . Like us on Facebook or follow us on Twitter for more sports updates. You can also download the NDTV Cricket app for Android or iOS.