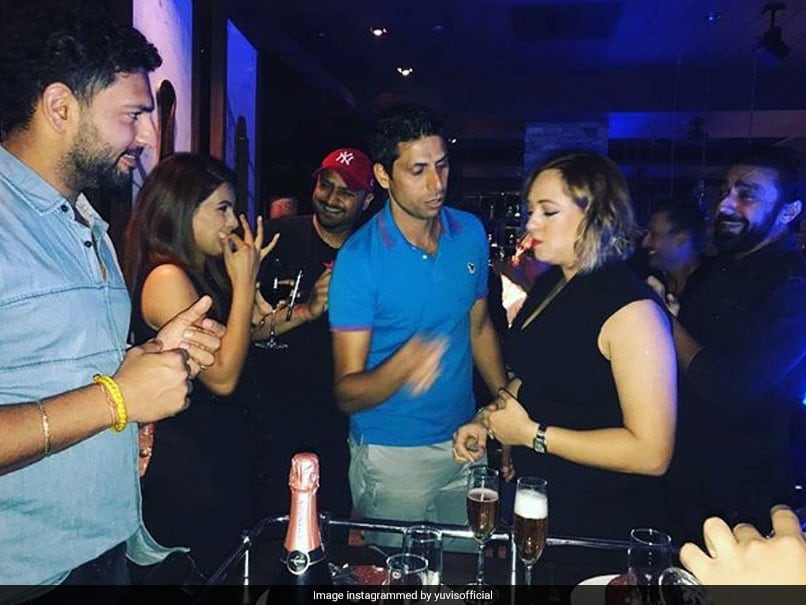 Ashish Nehra continued to entertain the gathering with his jovial nature.© Instagram

Yuvraj Singh hosted a birthday party for his wife Hazel Keech on Thursday. Among many of his friends from the cricket fraternity, former India fast bowler Ashish Nehra continued to entertain the gathering with his jovial nature. Along with Ashish Nehra, Yuvraj Singh's former teammates Zaheer Khan, Harbhajan Singh and Ajit Agarkar also attended Hazel Keech's birthday bash. In the photographs and videos shared by Yuvraj, Nehra appeared having a fun time, shaking a leg and smearing the birthday cake on Hazel's face.

Yuvraj jokingly complained about Nehra's funny business to the pacer's wife Rushma Nehra. "@rd.nehra look what your husband did to my wife's face," Yuvraj said in an Instagram post on Friday.

Besides mentioning Nehra's mischievous act, the Indian all-rounder wished his wife on her 32nd birthday saying: "About last night who made @hazelkeechofficial bday special! friends who matter the most were there! We all love you Hazel."

The 37-year-old all-rounder recently turned the clock and amazed his fans with an audacious reverse sweep six during a friendly match between Air India and a Maldives-based cricket team at the Ekuveni sports grounds in Male.

Yuvraj was representing Air India in the India-Maldives Friendship Cricket Series, a competition jointly organised by the Maldives sports ministry.

In the fresh season, Yuvraj will play for Mumbai Indians, who bought the seasoned all-rounder for Rs 1 crore at the IPL auction. He went unsold in the first round of the auction but was picked by the Mumbai franchise in the second round.

Zaheer Khan Cricket
Get the latest updates on IND vs NZ 2021, check out the Schedule and Live Score . Like us on Facebook or follow us on Twitter for more sports updates. You can also download the NDTV Cricket app for Android or iOS.