Rovman Powell hit as many as 10 sixes in his innings, scoring 107 off 53 balls in the 3rd T20I against England. 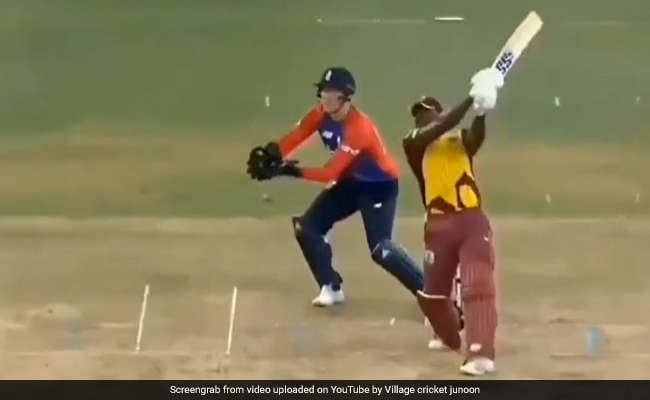 Rovman Powell wasn't even sure about getting to play the third T20I against England till last evening. He was told about his selection later in the day as West Indies were planning to "split" their two left-handers in the middle-order. Eventually, it turned out way better than what the Windies would have imagined. Powell went on to slam his maiden T20I hundred and the plan to split the lefties also worked as Nicholas Pooran smashed 70 off 43 balls. West Indies ended up winning the run-fest - the most runs in a T20I match in West Indies was scored on Wednesday - quite comfortably by 20 runs despite a gallant chase from England.

It was Powell who showed some breathtaking strokeplay to take West Indies to 224 for 5 batting first.
The right-hander hit as many as 10 sixes in his innings, scoring 107 off 53 balls. Only six batters in the history of T20Is have hit more sixes in an innings than Powell. Afghanistan's Hazratullah Zazai holds the record for most sixes in a T20I innings. He had hit 16 sixes against Ireland.

Powell became the third West Indies cricketer to score a T20I hundred after Chris Gayle and Evin Lewis when he reached the three-figures off 51 balls.

"I came to know last night (about selection), had a chat with the captain, the plan was me splitting the two left-handers, Pooran and Bravo. It's all about improvement, wrist spin was an issue for me in the past, but I went away and worked on it over the last 6-7 months. We knew Adil Rashid was the most threatening bowler for them, was looking to get 25-30 off him, and then target the others," said Powell after the game, which West Indies a 2-1 lead in the five-match series.

Powell, also added that he was aware that only Gayle and Lewis had previously hit T20I hundreds for West Indies.

"There was a big side and a small side, didn't want either two right-handers or left-handers to Rashid. Everything came off the middle of the bat today. Yes, I knew Universe Boss and Evin Lewis (were the only ones to have scored T20I hundreds for West Indies)," he added.