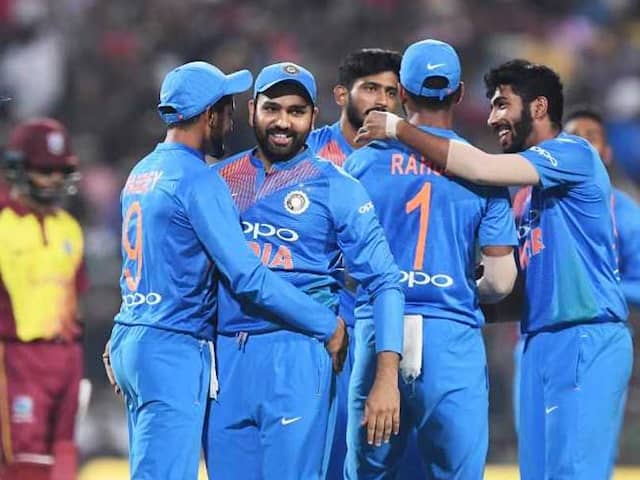 With Virat Kohli rested, Rohit Sharma led India to a 3-0 clean sweep against the West Indies in the three-match T20I series. Leading by example, Rohit scored a century, his fourth in the shortest format, in the second T20I, which India won by 71 runs in Lucknow. Watching him lead the men-in-blue to victory with dominance, former India batsman VVS Laxman couldn't resist heaping praises on the 31-year-old Mumbai batsman.

"I was again mightily impressed with Rohit's captaincy. He is becoming a semiregular at the job, especially in T20 cricket, and handled his troops admirably," Laxman wrote in a column for The Times of India.

In the third and final T20I in Chennai on Sunday, India rode on impressive fifties by Shikhar Dhawan and Rishabh Pant to beat the Windies by six wickets in a last ball thriller. With this, they clinched the three-match series 3-0 and Rohit became the only Indian to have led his team to a 3-0 T20I whitewash twice. Earlier, Rohit had led India to a 3-0 clean sweep against Sri Lanka in December last year.

Hailing the regular vice-captain for his grit, Laxman added: "He is proactive on the field and has clear plans, but isn't afraid to improvise. He also continued to bat beautifully, and his fourth T20I hundred in Lucknow was one for the ages. I have seen few batsmen combine power and elegance with such nonchalance."

India have registered three such T20I whitewashes in their history of cricket. Apart from Rohit's double delight; former India captain MS Dhoni once led the nation to 3-0 clean sweep against Australia in 2016.

Having led India in 12 matches, Rohit has been the best in the business. He has won 11 matches and lost just one so far in his career as captain. On the second place, Pakistan's Shoaib Malik, Sarfraz Ahmed, Australia's Michael Clarke and Asghar Stanikzai of Afghanistan, all had 10 wins from their first 12 T20Is.

With 2207 runs to his name from 87 matches, Rohit is the second highest run-scorer in T20 International cricket. He is just 64 runs short of New Zealand batsman Martin Guptill's tally of 2271 T20I runs. India skipper Kohli is on the fifth place with 2102 runs in 62 matches.