Playing for India Maharajas in the special match against World Giants on Friday, Mohammad Kaif claimed the wicket of Thisara Perera. 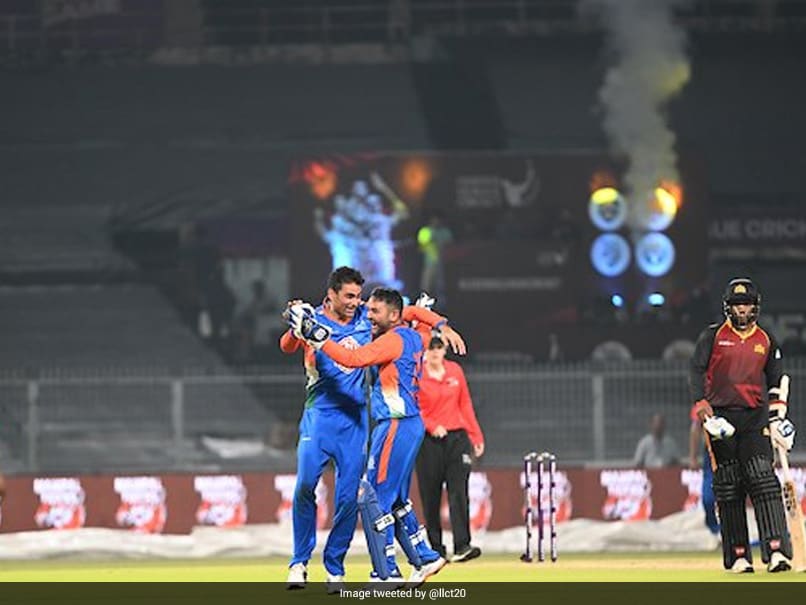 Mohammad Kaif celebrates after taking the wicket of Thisara Perera.

Former India batter Mohammad Kaif boasted of his bowling skills on social media after claiming a wicket in a match between India Maharajas and World Giants ahead of the Legends League Cricket season 2. Posting the video of him taking a wicket on his bowling in the game, Kaif tagged BCCI president and former India captain Sourav Ganguly, saying: "Special attention skipper : Please see the drift, flight and turn by Mohammad Kaif the all-rounder. Dada do you think you missed a trick?"

It is worth noting that Kaif was a part of the Indian team that was captained by Ganguly in the early 2000s. However, the batter didn't get any bowling opportunity in the ODIs, while in the Test format, he bowled only 18 balls in his entire career.

Special attention skipper: Please see the drift, flight and turn by Mohammad Kaif the all-rounder. Dada do you think you missed a trick? pic.twitter.com/7Of9RKRS9o

Kaif got a wicket on the second ball of his first over on Friday. He bowled it outside off-stump to World Giants' Thisara Perera. The batter got an outside edge and short third man Parvinder Awana, who was the substitute fielder, covered good ground to his left before putting a dive and taking the catch.

Talking about the match, Pankaj Singh returned figures of 5 for 26 in his four overs to stop World Giants at 170 for 8 despite Kevin O'Brien's 52 off 31 balls.

In reply, India Maharajas lost Virender Sehwag, Parthiv Patel and Kaif early and were thus reduced to 50 for 3 in 6.5 overs. This is when Yusuf Pathan entered at the crease and stitched 103 runs for the fourth wicket with Tanmay Srivastava to almost seal the game for India Maharajas.

Srivastava scored 54 runs off 39 balls while Yusuf remained not out on 50 runs off 35 balls.

The Legends League Cricket season 2 kicks off on Saturday with a match between India Capitals and Gujarat Giants at Eden Gardens.

Comments
Topics mentioned in this article
Cricket Mohammad Kaif Sourav Ganguly
Get the latest updates on Fifa Worldcup 2022 and check out  Fifa World Cup Schedule, Stats and Live Cricket Score. Like us on Facebook or follow us on Twitter for more sports updates. You can also download the NDTV Cricket app for Android or iOS.