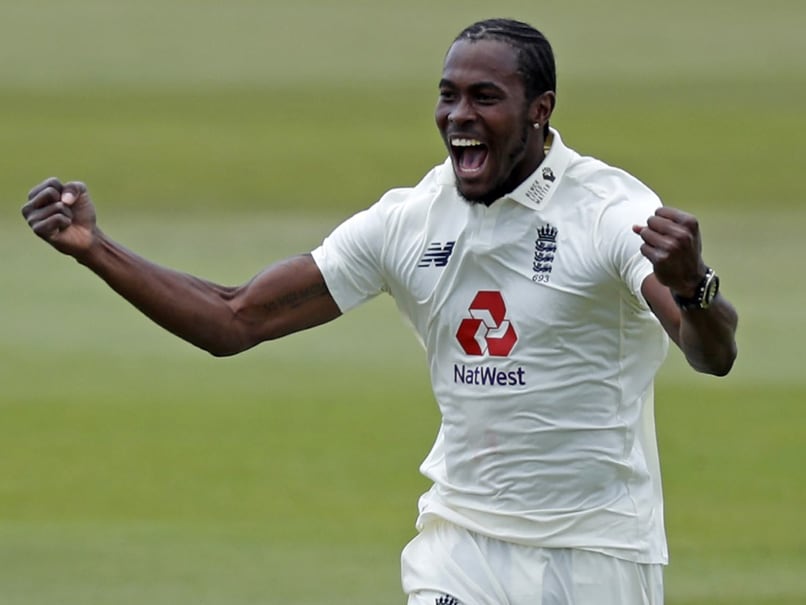 Jofra Archer will be available for selection for the 3rd Test if his COVID-19 tests return negative.© AFP

England fast bowler Jofra Archerwill be available to play in next week's third and final Test against the West Indies after being ruled out of the second match for a breach of coronavirus protocols, the England and Wales Cricket Board announced Saturday. Both teams have been living in "bio-secure bubble" sites at the Ageas Bowl, the venue for last week's first Test, and Emirates Old Trafford, where the final two matches of the series are taking place.

Archer broke the rules by going home to Hove on Monday, during which time he met with an unnamed individual from outside the "bubble" following England's four-wicket loss in the first Test at Southampton last week before the team travelled to Manchester.

He was then left out of the ongoing second Test that started Thursday, with Archer self-isolating in an onsite hotel room at Old Trafford for five days.

A disciplinary hearing chaired by England managing director Ashley Giles on Friday decided an "undisclosed" fine and a written warning amounted to sufficient punishment, with the 25-year-old Archer's "impeccable record" counting in his favour.

Former England captain Michael Vaughan had called for Archer to also be dropped from the third Test.

Archer will now undergo two COVID-19 tests, which have to produce negative results, before his self-isolation period is lifted.

The ECB said Archer was due to rejoin the squad on Tuesday -- three days before Friday's start of the third Test.

"Jofra Archer has been fined an undisclosed amount and received an official written warning after admitting to breaching the team's bio-secure protocols on Monday 13 July when he made an unauthorised visit to his home in Hove," said an ECB statement.

Former England spinner Giles said Thursday that Archer's breach of the regulationswas a potential "disaster" that could have cost "tens of millions of pounds" amid fears it could scupper an international programme taking place against the backdrop of the coronavirus pandemic.

But Giles added: "Young men make mistakes... Jof will learn from it.

"We will support him and move on. He is a fine young man, incredibly polite, works hard and is a great asset to this team."

Archer also received the backing of England star Ben Stokes, who said after Friday's play in Manchester: "We really need to be there to support Jofra right now."

Before the second Test started, Archer apologised by saying he was "extremely sorry", adding: "I fully accept the consequences of my actions."

Archer was expected to play in the second Test after taking three wickets during the West Indies' successful run chase in Southampton, with England having decided to rest fellow seam bowlers James Anderson and Mark Wood.

Archer burst onto the international scene last year, when he bowled the decisive Super Over in England's World Cup final win over New Zealand at Lord's.

Jofra Archer Cricket
Get the latest updates on Fifa Worldcup 2022 and check out  Fifa World Cup Schedule, Stats and Live Cricket Score. Like us on Facebook or follow us on Twitter for more sports updates. You can also download the NDTV Cricket app for Android or iOS.