While protesters are calling CWG 2018 the Stolenwealth Games, organisers, players, fans and even the Australian Government see the worth of the extravaganza. 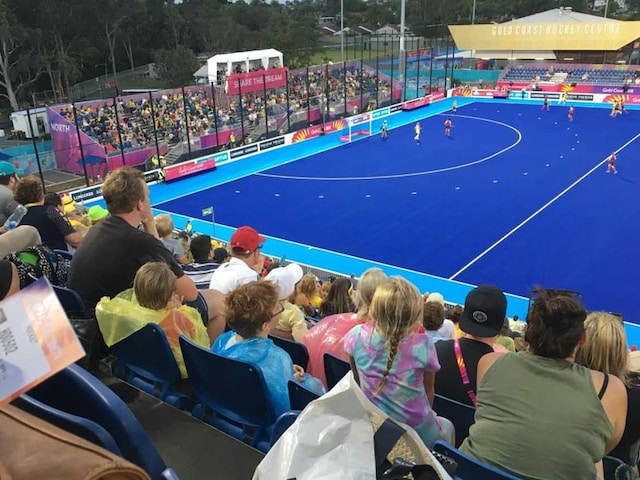 It is the opening match of the women's hockey fixture at the Commonwealth Games - Australia vs Canada. After a long wait outside the Carrara Stadium the previous night, they wait patiently for their turn for the bus to pick them from the Gold Coast University hospital tram station. Inside, the Commonwealth Games hockey venue is packed to the rafters. Around 10,000 fans turn up for the game. Sam Martin, a follower of women's hockey says," I think it is the standard of hockey that countries get to play that makes the Commonwealth Games relevant. In one of the fixtures Australia takes on Ghana and that would not happen in a normal event."

That is what the Commonwealth Games is proud of, besides this edition's move to gender equality for medals, one that has been described as a first. Perhaps a lesson for the International Olympic Committee (IOC) too.

Athletes from 71 nations representing 30 per cent of the world's population are competing at the ongoing Gold Coast Commonwealth Games. For India, this is perhaps one of the best platforms to show their might at a multi-disciplinary event.

Over 300,000 Australians watched the opening ceremony of the Commonwealth Games on April 4. People paid as much as 380 Australian dollars to buy last-minute tickets. Another global TV audience of 300,000 tuned onto it as well.

The Secretary General of Commonwealth Patricia Scotland says, "If you see the energy of the players and the teams, it is very healthy. we have 71 countries represented here. Fifty-three countries (are) here in their full glory. They call this one family and we love being together."

Her words are echoed by the CEO of Australian Sports Commission Kate Palmer, "In the international context, coming together as the Commonwealth and being able to share our stories is nation building and Commonwealth building in itself."

The Queensland Government has spent $320m Australian dollars on the sporting infrastructure and that was the catalyst for an economic boom. The $550 million athletes' village will be repurposed into a health and knowledge facility targeted for commercial development. And it's the legacy of the Games that everyone is talking about.

Nick Foa, the Deputy Secretary, Victoria Government says, "From a facilities point of view, the Queensland government has done well. They were used and tested before the Games. All these will be used after by the community as well. That's been an experience in Melbourne. The Melbourne Sports and Aquatic park in Albert Park is a legacy of the CWG 2006. Those facilities are utilised by the local and elite sports community."

On the economic front, the $2 billion state, federal and local government outlay to host the spectacle is expected to generate 16000 jobs and $4 billion in economic activity.

The Regional Vice President, Commonwealth Games Federation, Fortuna Belrose says, "Of course it is a huge cost to the cities and the countries that host but the important thing is the planning that goes behind it and also the legacy impact the country looks for, how the country is able to maximise those legacy benefits. In the Caribbean we hosted a cricket World Cup.

"We have great legacies of that event. In India Metro railways were built in Delhi, linking remote communities to each other. All of these are done at a huge cost but it pays off in the end. Sport pays for itself in the Commonwealth, it is all about how we utilise it long after they are gone."

While many participating nations agree that the idea of Commonwealth is outdated but the Commonwealth Games for them is much more than a mass sporting spectacle. The member countries say that they are a vehicle of sports diplomacy, of participation for a cause they all want to commit to.

Comments
Topics mentioned in this article
CWG 2018 India Other Sports
Get the latest Cricket news, check out the India cricket schedule, Cricket live score . Like us on Facebook or follow us on Twitter for more sports updates. You can also download the NDTV Cricket app for Android or iOS.