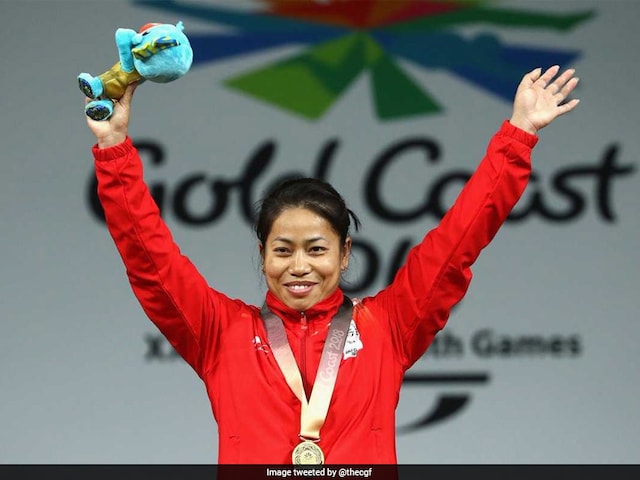 15:48 IST: Australian police on Friday said that they had charged a Mauritian Commonwealth Games official with sexual assault following an incident on the Gold Coast last week. The official and alleged victim were not named, but police previously said they were investigating a Mauritian athlete's complaint of "inappropriate touching". The man will appear at a magistrates' court on April 17, two days after the Commonwealth Games finish.

#SaraswatiRout was eliminated from the Women's 58kg #GC2018Weightlifting competition after 3 unsuccessful attempts to lift 78kgs in Snatch category.#TeamIndia at #GC2018

14:50 IST: In boxing, Amit Panghal of India beats Tetteh Sulemanu of Ghana with a unanimous score of 5-0 in men's 46-49 kg round of 16. He will next meet Aqeel Ahmed of Scotland.

14:31 IST: Gareth Evans of Wales, who won gold in men's 69kg weightlifting, tweeted 'Had to wear my true colours!'

Well what a day!
Could you tell I enjoyed that performance?
Had to wear my true colours! @Wrexham_AFC #UTST @GC2018 #GC2018Weightlifting pic.twitter.com/XChIQC1pDl

14:29 IST: Mixed news for India in Squash. While Joshna Chinappa registered a dominating win, Dipika Pallikal goes down 3-11, 6-11, 2-1 to Alison Waters of England.

14:04 IST: Joshna Chinappa beats Tamika Saxby in straight sets in the Squash Women's round of 16.

13:38 IST: In Squash, India's Joshna Chinappa takes on Tamika Saxby of Australia in the Women's Singles Round of 16.

Will he be able to maintain his current 3rd position? #GC2018
Lets #WaitnWatch @WeightliftingIN pic.twitter.com/QdLVGdfShQ

Here are some moments captured from the Indian Eves' dominating win against Malaysia in the second group stage match at the @GC2018 XXI Commonwealth Games in Australia on 6th April. Album- https://t.co/j3W7qSLmCR#IndiaKaGame #HallaHockeyKa #GC2018 pic.twitter.com/r9dANHbxci

11:28 IST: India vs Scotland, Badminton Mixed Team Event, Group A: The pair of Ashwini Ponappa and N Sikki Reddy give India 3-0 lead in the tie after a 21-8, 21-12 win over Kirsty Gilmour and Eleanor O'Donnell.

11:10 IST: India vs Scotland, Badminton Mixed Team Event, Group A: The pair of Ashwini Ponappa and N Sikki Reddy take the first game 21-9 of the third match against the pair of Kirsty Gilmour and Eleanor O'Donnell. India lead the tie 2-0.

10:35 IST: India's Vikram Malhotra draws level after winning the second game 11-8 against Nick Matthew of England in the Squash Men's Singles Round of 16 clash

10:20 IST: In Squash -- England's Nick Matthew beats India's Vikram Malhotra 11-6 in game one of the Squash Men's Singles Round of 16 clash.

09:38 IST: In Lawn Bowls, Pinki continues her poor run. She lost 9-21 to Firyana Saroji of Malaysia.

09:25 IST: Naman Tanwar advances to Men's 91kg quarter-finals after a routine win over Haruna Mhando of Tanzania. In the quarter-final round, Naman will face Frank Masoe of Samoa on April 10.

09:10 IST: In boxing, Naman Tanwar is up against Haruna Mhando of United Republic of Tanzania in the Men's 91kg, round of 16.

09:00 IST: Deborah Deborah, Aleena Reji advance to 1/8 finals in the Women's sprint qualifying -- Cycling, track. In qualification stage, Deborah finished in 13th position with the time of 11.484, while Aleena finished last with the time of 12.207.

#TeamIndia pair of #Deborah & #AleenaReji have qualified in the #GC2018 #GC2018CyclingTrack Women's Sprint Event! They will now compete in the 1/8 Finals later today!#Congratulations you both! @OfficialCFI @Media_SAI pic.twitter.com/jbzXhONApr

08:31 IST: In Lawn bowls, India's Pinki is up against Firyana Saroji of Malaysia in the women's singles section D, round 4

08:15 IST: Trivia -- In the history of the Commonwealth Games, no athlete had ever represented Guernsey Commonwealth Games Association until Billy Le Poullain stepped into the ring on the opening Day of the 21st edition of the games.

08:02 IST: In Lawn Bowls, Pinki lost to Litia Tikoisuva of Fiji in the Women's singles section D, round 2 and the men's team bowed out after a 15-14 defeat to England.

07:30 IST: Sanjita Chanu stands tall on the podium as the national anthem plays in the background. Sanjita lifted a total of 192 kg which included a CWG record of 84 kg in the snatch and 108 kg in clean and jerk. Loa Dika Toua of Papua New Guinea was distant second with 182 kg while New Zealand's Rachel Leblanc-Bazinet took bronze with 181 kg.

Bhartiya Naari Sab par Bhaari. One more Gold. Congratulations #SanjitaChanu for winning our second gold in #GC2018Weightlifting in the women's 53kg category. #CWG2018
Her second CWG gold after the 48kg one in Glasgow. Proud of you champion. pic.twitter.com/Xnms7T6Byz

07:20 IST: And India starts off with a bang, yet again! Sanjita Chanu wins gold in Women's 53kg category weightlifting.

07:02 IST: Weightlifter Sanjita Chanu has already given a strong start to India in the women's 53 kg category as she registers a Commonwealth Games record.

07:00 IST: Hello and welcome to the live blog of Day 2 of the Commonwealth Games.

A record-smashing Mirabai Chanu and a perseverant P Gururaja claimed gold and silver respectively as weightlifters lived up to the pre-event hype by delivering opening-day medals for India while star badminton players added to the cheer by making a winning start in the 21st Commonwealth Games.

Chanu smashed the Games records in 48kg category snatch, clean and jerk and overall en route her gold-medal winning performance, which fetched her a thunderous applause from the Australian fans, who queued up to take her autograph after the medal ceremony. Chanu managed to lift 196kg (86kg+110kg) in a remarkable effort.

P Gururaja survived a few anxious moments after two failed attempts in clean and jerk to claim a silver medal. The 25-year-old son of a truck driver equalled his personal best of 249kg (111kg+138kg) to finish second in the event and ensure that India woke up to the news of a medal on the very first day of competitions.

Weightlifting was not the only reason why India could boast of a good opening day. The much-hyped shuttlers also made a winning start to their campaign, defeating Sri Lanka and Pakistan 5-0 respectively in the mixed team event matches.

Saina Nehwal, who was making headlines for her ferocity in getting Games Village accreditation for her father, brought quite a lot of it on court as well and dispatched her rival Madushika Beruelage in a mere 22 minutes.

She was later in action against Pakistan as well and was her usual clinical self against Mahoor Shahzad, claiming a straight-game triumph in 26 minutes to ensure that India had a winning day to celebrate.

Veteran Manoj Kumar (69kg) was the lone boxer in action today and the 2010 CWG gold-medallist hammered Nigeria's Osita Umeh to move into the pre-quarterfinals. The former Asian medallist won on a unanimous decision.

On the squash court, Dipika Pallikal and Joshna Chinnappa, who would be defending their women's doubles gold medal, made winning starts in their singles competitions.

While Pallikal got the better of Trinidad and Tobago's Charlotte Knaggs, Chinnappa sailed past Papua and New Guinea Lynette Vai.

But Saurav Ghosal's 2-3 defeat to Jamaica's Chris Binnie came as a massive shock even though Harinder Pal Sandhu and Vikram Malhotra won their respective opening matches.

The table tennis players got past their initial hurdles rather easily with the women's team defeating Sri Lanka 3-0. The men's team blanked Trinidad and Tobago 3-0 before beating Northern Ireland by a similar margin.

Apart from Ghosal, the other major disappointment was the women's hockey team's stunning 2-3 defeat against Wales in its lung-opener.

In swimming, Virdhawal Khade qualified for the semifinals of the 50m men's butterfly event but could not make the final, finishing 15th overall. Sajan Prakash failed to even make the semifinals in the same event.

The Indians were not much of a force on the cycling track either, finishing sixth in the Women's Team Sprint, which ruled them out of medal contention. The men's team did even worse, finishing seventh in their competition.

Comments
Topics mentioned in this article
Other Sports All Sports CWG 2018
Get the latest Cricket news, check out the India cricket schedule, Cricket live score . Like us on Facebook or follow us on Twitter for more sports updates. You can also download the NDTV Cricket app for Android or iOS.