India will play Australia in the first of three-match T20I at the Gabba in Brisbane on Wednesday. 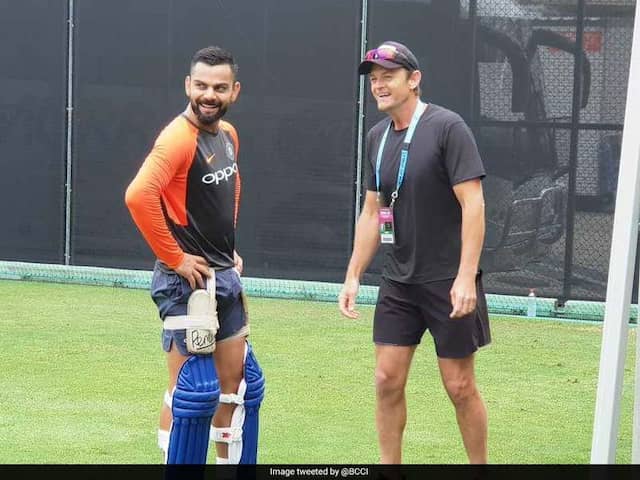 Virat Kohli and Adam Gilchrist can be seen in all smiles during training.© BCCI

The Indian cricket team is gearing up for the first of a three-match Twenty20 International (T20I) slated to take place at the Gabba in Brisbane on Wednesday. The tourists underwent their first training session on Sunday with skipper Virat Kohli sweating it out in the field. But he took a little time off during the practice session on Monday, and was seen sharing a light moment with former Australian wicket-keeper Adam Gilchrist. In the pictures posted by the Board of Control for Cricket in India (BCCI) on Twitter, both Kohli and Gilchrist can be seen in all smiles during training.

Apart from Kohli, top-order batsmen Shikhar Dhawan and KL Rahul were seen at the nets while Jasprit Bumrah too did a bit of batting practice.

Another day, another drill - Snapshots from #TeamIndia's practice session as they build up to the big game against Australia at The Gabba pic.twitter.com/hKeeTi9AOU

That moment at the nets when @Jaspritbumrah93 went Hammer and Tongs #TeamIndia pic.twitter.com/mWLIlGYHby

Among others, premier Indian pacer Bumrah, all-rounder Krunal Pandya and wicketkeeper Dinesh Karthik were seen having a chat.

Meanwhile, India head coach Ravi Shastri vowed that skipper Kohli will not tone down his passionate approach despite Australia's new, polite approach when the two teams battle it out in the four-Test series for the Border-Gavaskar Trophy that begins on December 6 at Adelaide Oval.

Shastri added that his team has learned from their losses in series defeats against other Test nations in 2018 as well as from four years ago in Australia and his current squad is well-placed for success.

Following the T20Is series, India will play Australia in four-match Test series, with the inaugural match slated to take place in Adelaide from December 6.

The visitors will end their tour with the third and final ODI on January 18, 2018.

Virat Kohli Adam Gilchrist Cricket
Get the latest Cricket news, check out the India cricket schedule, Cricket live score . Like us on Facebook or follow us on Twitter for more sports updates. You can also download the NDTV Cricket app for Android or iOS.