Virat Kohli and Ajinkya Rahane's unbeaten 90-run partnership helped India reach 172 for three at stumps on Day 2 of the 2nd Test in Perth. 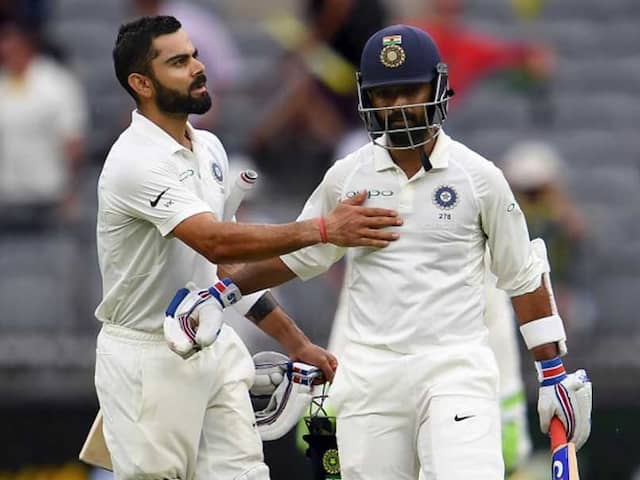 Virat Kohli and Ajinkya Rahane starred with the bat for India on Day 2 of the 2nd Test vs Australia.© AFP

Virat Kohli and Ajinkya Rahane saved the day for India, turning the tide in the visitors' favour on Day 2 of the second Test against Australia in Perth on Saturday. The Indian team skipper and his deputy strung together an unbeaten 90-run stand for the fourth wicket as India ended the day 154 runs behind Australia's first innings total of 326. At 8/2 and with both openers back in the hut, India found themselves on the backfoot early on. But some cautious batting by Cheteshwar Pujara (24) and the grit of captain Kohli, helped steady India and reach 82 for 2.

Mitchell Starc, who had come under some criticism following a below-par showing in the opening Test in Adelaide, took his second wicket of the match to end Pujara's vigil.

However, Kohli and Rahane wrestled away the control from the Australians with a show of defiance to make sure India didn't lose any more wickets and ended the day on 172 for three.

High praise for the fight that India have shown today after being 2 wickets for 8 runs. @imVkohli unbelievable! @ajinkyarahane88 exceptional!

The pitch played a bit better today..
but how good did Rahane and Kohli played!!!
I hope our batsmen again watch.. no holding out at 3rd man.. no silly ramps to 3rd man. Or late cuts off Lyon. Just good old discipline. #elitehonesty #AUSvIND

At stumps, the imperious Kohli was unbeaten on 82 and shaping as the major stumbling block for Australia, with Ajinkya Rahane also in fine touch on 51.

Earlier, India had cleaned up the Australian tail with Ishant Sharma (4-41) on a hat-trick in the second innings.

At 310 for six, the home side were edging towards an imposing first innings total after winning the toss and electing to bat.

But the Indian team struck back to claim the last four wickets for just 16 runs.

Michael Clarke Australia vs India, 2nd Test Cricket
Get the latest Cricket news, check out the India cricket schedule, Cricket live score . Like us on Facebook or follow us on Twitter for more sports updates. You can also download the NDTV Cricket app for Android or iOS.