Hardik Pandya, KL Rahul Fiasco: Everything You Need To Know

Social media was enraged as Hardik Pandya bragged about his "hook-ups" with several women. 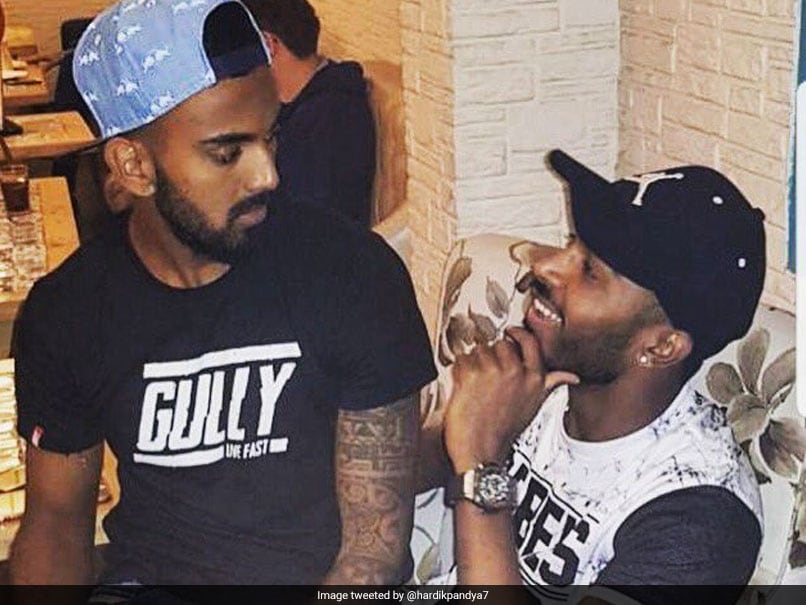 BCCI has suspended Hardik Pandya and KL Rahul from playing any form of cricket.© Twitter

Hardik Pandya and KL Rahul appeared on a TV chat show, last Sunday (January 6), and sparked outrage with their sexist comments about women. Social media was enraged as Hardik Pandya bragged about his "hook-ups" with several women and said he liked to check them out at bars or nightclubs. While Pandya boasted about being open with his parents about the liaisons, Rahul was more reserved with his comments. Nevertheless, the pair were blasted for their distasteful remarks by Twitter users in a mass tirade.

Here's everything you need to know about the events that unfolded since Hardik Pandya and KL Rahul appeared on the TV show.

After the backlash, Hardik Pandya took to social media on Tuesday and apologised for his comments, stating that he "got carried away by the nature of the show", but meant no disrespect to anyone.

Meanwhile, KL Rahul did not make any public statement.

On Wednesday, barely hours after Pandya's apology, the Board of Control for Cricket in India's (BCCI) Committee of Administrators (CoA) issued a show cause notice to both the cricketers and sought an explanation within 24 hours for their remarks on the TV show.

"We have sent show cause notices to Hardik Pandya and KL Rahul for their comments. They have given 24 hours to give an explanation," CoA chief Vinod Rai said.

Pandya responded to the BCCI's show-cause notice by saying that he was "sincerely regretful" for his comments.

"I made an appearance on the chat show where I have made certain statements without realising that these could be disrespectful and offend sensitivities of viewers for which I am sincerely regretful," stated Pandya's response.

"I would like to assure you that there was no malice or any sort of ill-intent on my part to offend anyone or portray any section of the society in bad light. I made these statements in the flow of the show and had not comprehended the extent to which my statements would be found offensive," he added.

Vinod Rai was not convinced with Pandya's apology and recommended a two-ODI ban for both the players, on Thursday.

"I am not convinced with Hardik's explanation and I have recommended a two-match ban for both players. However the final decision will be taken once Diana gives her go ahead," Rai said.

Rai, in an e-mail to BCCI CEO Rahul Johri, labelled the comments by Hardik Pandya and KL Rahul "very crass."

"I have seen the remarks made by these two players on the show in print today. Very crass. No apology can cover it. I had asked Diana (CoA member Diana Edulji) to suggest penalty because I had not seen the clip. I think we need to give both of them a two-match suspension. If Diana agrees, Rahul please draft an appropriate instruction and issue today as their explanations have come in. Separately, please prepare an advisory to all BCCI contracted players and support staff," Rai wrote.

Co-member Diana Edulji, who was seeking a legal opinion on the course of action, promptly replied.

"There is no delay as such. Big steps will be taken through a proper process and protocol as per BCCI's rules and regulations. This is my response to the story," Diana Edulji responded.

Later in the day, BCCI treasurer Anirudh Chaudhry called for an inquiry to find out whether or not the two sought permission from the cricket board to appear on the show, and if yes, Chaudhry wanted to know who gave them the permission.

India skipper Virat Kohli then broke his silence over the matter and said that the team doesn't align with the views and those were the opinions of the players.

"We as the Indian cricket team and responsible cricketers don't align with those views, those were individual opinions. We are still waiting for a decision to be made," Kohli said at the press conference ahead of the first ODI against Australia in Sydney on Friday.

BCCI's legal team refused to declare Hardik Pandya and KL Rahul's sexist comments a violation of the code of conduct.

When the BCCI's legal firm made it clear that the objectionable comments made by Hardik Pandya do not fall under the Code of Conduct ambit, Diana Edulji recommended "suspension till further action".

"It is imperative that players be put under suspension till further course of action is decided for this misconduct as was done in case of (BCCI) CEO (Rahul Johri) when he was sent on leave on sexual harassment matter," read Edulji's response to the legal opinion.

"Based on legal opinion and final procedure is laid down to address this issue, will recommend that a communication is sent to concerned players and team immediately," Edulji wrote in response to recommendations from the Board's legal firm Cyril Amarchand Mangaldas.

Just hours before India's first ODI against Australia, the BCCI confirmed that Hardik Pandya and KL Rahul were suspended from playing any form of cricket with immediate effect and will return to India from the ongoing tour.

"The CoA in accordance with the BCCI has decided to suspend Hardik Pandya and KL Rahul from playing any form of cricket after their comments on a TV show," read the BCCI statement.

"The duo will now return to India and an enquiry and proceedings will be made against them for misconduct and indiscipline that have been initiated under Rule 41 of the BCCI Constitution."

"In terms of Rule 41(6) of the BCCI Constitution, the players are hereby suspended with immediate effect from participating in any manner whatsoever in any match or function or event or activity that is authorized, organized, sanctioned, recognized or supported in any way by the BCCI, the ICC or any State Association, until final adjudication of the matter," added the release.

Following their suspension, Vinod Rai initiated an inquiry over Hardik Pandya and KL Rahul's misconduct and indiscipline. Diana Edulji, however, warned Rai of any "cover-up" in the inquiry.

Moreover, Edulji also objected to Johri's role in the preliminary inquiry into the matter.

In a response to Rai's mail, Edulji stated that the CoA might end up getting criticised if Rahul Johri conducts the preliminary inquiry because he himself has been at the receiving end of "grave sexual allegations."

"With KL Rahul and Hardik Pandya set to return from Australia, the All-India Senior Selection Committee has decided to send all-rounder Vijay Shankar & batsman Shubman Gill as replacements," the BCCI said in a release.

"Vijay Shankar will join the team before the start of the 2nd ODI in Adelaide".

Virat Kohli Cricket Australia vs India 2018/19
Get the latest updates on Fifa Worldcup 2022 and check out  Fifa World Cup Schedule, Stats and Live Cricket Score. Like us on Facebook or follow us on Twitter for more sports updates. You can also download the NDTV Cricket app for Android or iOS.