Diana Edulji had reportedly not seemed convinced with the idea of BCCI CEO Rahul Johri conducting a preliminary inquiry. 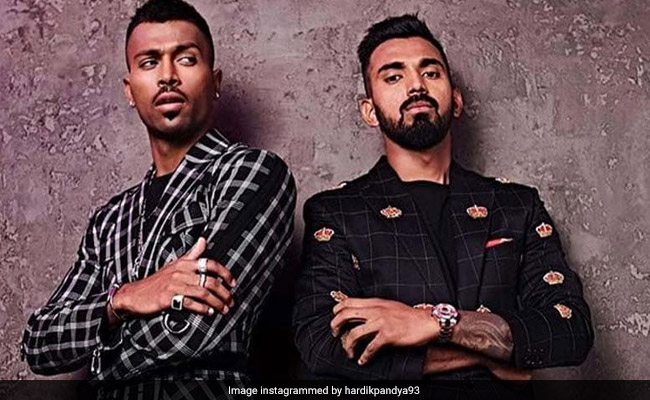 Hardik Pandya and KL Rahul appeared on the show Koffee With Karan.© Instagram/hardikpandya93

Hardik Pandya and KL Rahul have been suspendedfrom playing any form of cricket by the Board of Control for Cricket in India (BCCI) after their controversial comments on a popular TV Show kicked up a storm. Following their suspension, Committee of Administrators (CoA)chief Vinod Rai had initiated an inquiry over their misconduct and indiscipline. Now, in the wake of such developments, CoA member Diana Edulji has warned Vinod Rai of any "cover up" in the inquiry. Moreover, Edulji has also objected to BCCI CEO Rahul Johri taking up the preliminary inquiry into the matter.

In Edulji's e-mail accessed by Times of India, which was in response to Vinod Rai's mail over expediting the inquiry process, it was mentioned that the CoA might end up getting criticised if Rahul Johri conducts the preliminary inquiry, because he himself has been at the receiving end of "grave sexual allegations." Edulji had further elaborated that any hurry in getting the inquiry done will come across as a cover up job. She insists the inquiry should be done by the CoA along with the three BCCI office-bearers.

Hardik Pandya and KL Rahul had appeared on popular chat show Koffee With Karan, and had made misogynistic, sexist comments. Soon after getting suspended from all form of cricket by the BCCI, he tendered an unreserved apology. "I made an appearance on the chat show where I have made certain statements without realising that these could be disrespectful and offend sensitivities of viewers for which I am sincerely regretful," he wrote in his response, which is in PTI's possession.

"I would like to assure you that there was no malice or any sort of ill-intent on my part to offend anyone or portray any section of the society in bad light. I made these statements in the flow of the show and had not comprehended the extent to which my statements would be found offensive," he added. The 25-year-old, who is in Sydney for the ongoing series against Australia, vowed never to repeat the behaviour.

Lokesh Rahul Australia vs India 2018/19 Cricket BCCI
Get the latest updates on Fifa Worldcup 2022 and check out  Fifa World Cup Schedule, Stats and Live Cricket Score. Like us on Facebook or follow us on Twitter for more sports updates. You can also download the NDTV Cricket app for Android or iOS.