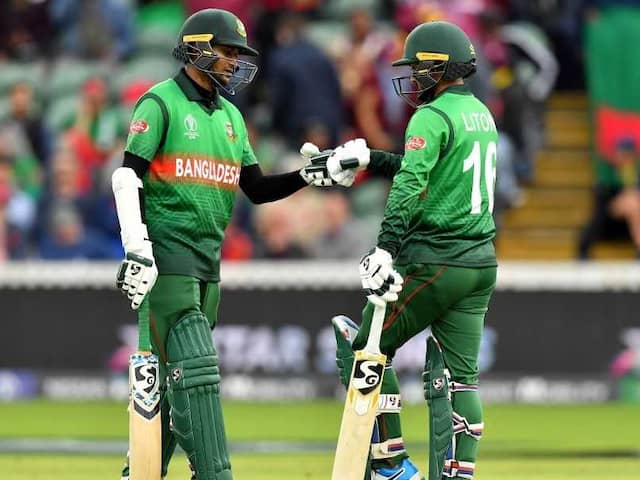 Shakib Al Hasan's second consecutive hundred along with Liton Das' unbeaten 94 helped Bangladesh register their second highest successful run chase in World Cup history. Needing 322 to claim their second win of the tournament, Bangladesh made a confident start as they repelled the West Indies' barrage of bouncers to get over the line at Taunton with 51 balls remaining. Shakib remained unbeaten with 16 fours in his 99-ball 124, while Liton Das scored an unbeaten 94 to accompany Shakib. Only once previously have Bangladesh managed 322 batting second, against Scotland in 2015, while the highest chase so far in this World Cup was New Zealand's 248 against Bangladesh. But the Tigers had already posted 330 in the first innings of their win over South Africa earlier in the competition and they were clinical on the day against the West Indies. Opener Tamim Iqbal paved the way in the chase with six fours in his 53-ball innings of 48 before being superbly run out by Sheldon Cottrell. Earlier, Shai Hope's 96 and the joint-fastest fifty of the tournament from Shimron Hetmyer inspired an imposing total of 321-8. The Windies couldn't be contained in the second half of the innings as Hope laid the foundations for his country's fourth highest World Cup score with a resolute 121-ball innings. Hitting around Hope, Evin Lewis made 70 from 67 balls before Hetmyer smashed 50 in 26 balls, featuring four fours and three sixes. (SCORECARD)

County Ground Taunton World Cup 2019 West Indies vs Bangladesh, Match 23 Live Blogs Cricket
Get the latest Cricket news, check out the India cricket schedule, Cricket live score . Like us on Facebook or follow us on Twitter for more sports updates. You can also download the NDTV Cricket app for Android or iOS.