Australia registered an emphatic 85-run win over India to clinch the ICC Women's T20 World Cup, a record fifth time in their history. 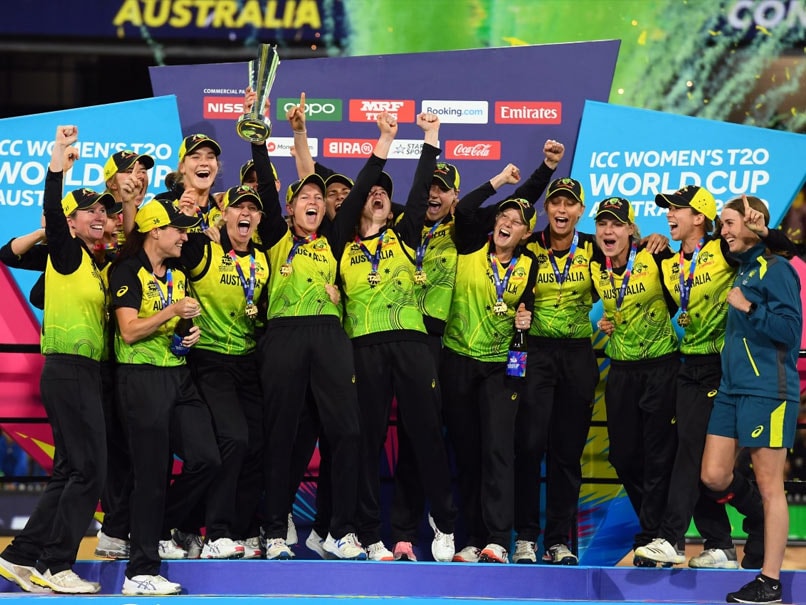 Australia women bowled out India for 99 in the final.© AFP

Australia women's cricket team registered an emphatic 85-run win over India to clinch the ICC Women's T20 World Cup, a record fifth time in their history. Australia are the most successful side in the tournament's history, having earlier won the title in 2010, 2012, 2014 and 2018. Harmanpreet Kaur-led India, who entered the final after their semifinal against England was washed out in Sydney, failed to rise to the occasion in the final. They had progressed to the summit clash by the virtue of topping Group A. In the group stage, India had won all four of their matches.

In the final at the iconic Melbourne Cricket Ground, hosts Australia won the toss and opted to bat. They rode on Beth Mooney's unbeaten 78 and Alyssa Healy's knock of 75 runs to post a mammoth 184/4 in 20 overs -- the highest total om a T20 World Cup final, men's and women's.

For India, Deepti Sharma top-scored with 33 runs as they lost seven of their batters for a single digit score in a tough chase.

Megan Schutt led the bowling attack with four wickets, while Jess Jonassen chipped in with three as Australia bowled out India for 99 in 19.1 overs.

Earlier, Healy showed intent straight away with a boundary off Deepti Sharma's first ball. She smacked two more in an eventful opening over which also saw her dropped by Shafali Verma.

Her opening partner Mooney also had an early let-off, with Rajeshwari Gayakwad putting down a caught and bowled chance when she was on eight.

India were nervous and their fielding poor, with the batswomen running quick singles.

An aggressive Healy was in fine touch and smashed two big sixes in succession off Gayakwad before bringing up her 12th T20 half-century with yet another boundary.

Australia reached 91 without loss at the halfway mark, with Healy then hitting three successive sixes off Shikha Pandey who was taken for 23 in the over. But her luck finally ran out going for another big hit, caught off Radha Yadav for 75 from just 39 balls.

At the other end, Mooney quietly went about her business to bring up her ninth T20 half-century before three late wickets fell.

But the late fightback wasn't enough to prevent Australia posting the highest score ever in a women's T20 World Cup final.

Australia Women Women's T20 World Cup Cricket India Women vs Australia Women, Final
Get the latest updates on IPL Auction 2023 and check out  IPL 2023 and Live Cricket Score. Like us on Facebook or follow us on Twitter for more sports updates. You can also download the NDTV Cricket app for Android or iOS.