Rohit Sharma scored a half-century before Krunal Pandya impressed with the ball to help India win the second T20I in Florida. 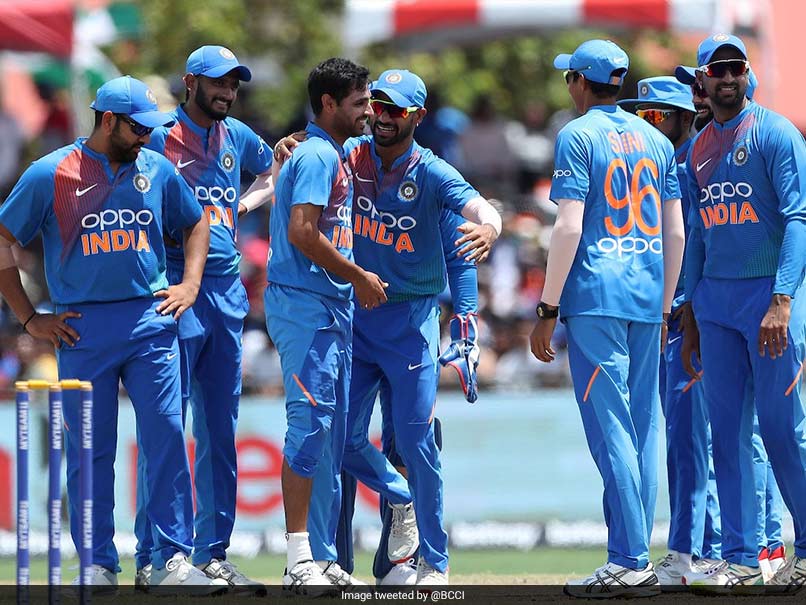 India clinched the three-match T20I series 2-0 with a match to spare.© AFP

India rode on a half-century by Rohit Sharma and impressive bowling display by Krunal Pandya to defeat the West Indies by 22 runs via Duckworth-Lewis-Stern method in the second T20 International in Florida on Sunday. With this victory, India clinched the three-match T20I series 2-0 with a match to spare. The third match will be played at Providence Stadium in Guyana on Tuesday. After opting to bat, India posted a competitive total of 167 for five. In the chase, the West Indies managed 98 for four in 15.3 overs before inclement weather forced players off the field.

The Duckworth-Lewis par score at that point was 120, and the West Indies were 22 runs behind.

Rohit Sharma top-scored with 67 off 51 balls, setting India up for a challenging total, before Krunal (20 off 13 balls) and Ravindra Jadeja propped up the innings by smashing 20 runs in the final over, which was bowled by Keemo Paul.

Krunal hit the first two balls of the final over for sixes before Jadeja also found one maximum.

During his knock, Rohit became T20 internationals' most prolific six-hitter, going past Chris Gayle with 106 maximums. He struck six fours and three sixes in the match.

India were off to a quick start as they crossed 50 in the seventh over, with Rohit doing the bulk of scoring.

Rohit found the gaps with ease, clipping Paul off his pads for a six over deep midwicket. The World Cup highest scorer then swept him for a four as the Indians upped the tempo.

Keemo Paul gave the West Indies their first breakthrough when he bowled Shikhar Dhawan with the Indian scorecard reading 67 for one in the eighth over.

Two quite overs followed as Indian captain Virat Kohli joined Rohit, who broke the shackles with a six over deep midwicket, Sunil Narine being the bowler, and then brought up his 17th half-century in this format with a single to long-off.

Nicely getting underneath the flight of left-arm spinner Khary Pierre, Kohli got going with a neat six.

Well settled at the other end, Kohli's deputy Rohit smashed Carlos Brathwaite for a six and four, as India's hundred came up in the 13th over.

It took a fine catch from Shimron Hetmyer to bring an end to Rohit's stay in the middle -- he hit one high up in the air off Oshane Thomas with just over six overs left in the Indian innings.

Sheldon Cottrell then had the big one, sending Kohli's middle stump cartwheeling for a 23-ball 28 with a perfectly-executed yorker and performing his trademark salute celebrations.

By that time tough, Kohli had becme the highest run scorer among Indians in T20 cricket, including domestic tourneys. In reply, the West Indies were off to a disastrous start with both openers Evin Lewis and Sunil Narine back in the hut, with just eight runs on the board in the third over.

Rovman Powell and Nicholas Pooran lifted the West Indies from the precarious situation with a 76-run stand for the third wicket before Krunal again got into the act by removing both the batsmen in a space of three balls in the 14th over.

India had won the first match by four wickets.

Rohit Sharma West Indies vs India 2019 Cricket West Indies vs India, 2nd T20I
Get the latest updates on ICC T20 Worldcup 2022 and CWG 2022 check out the Schedule, Live Score and Medals Tally. Like us on Facebook or follow us on Twitter for more sports updates. You can also download the NDTV Cricket app for Android or iOS.