India now lead the three-match series 1-0 after a win over the West Indies in Florida on Saturday. 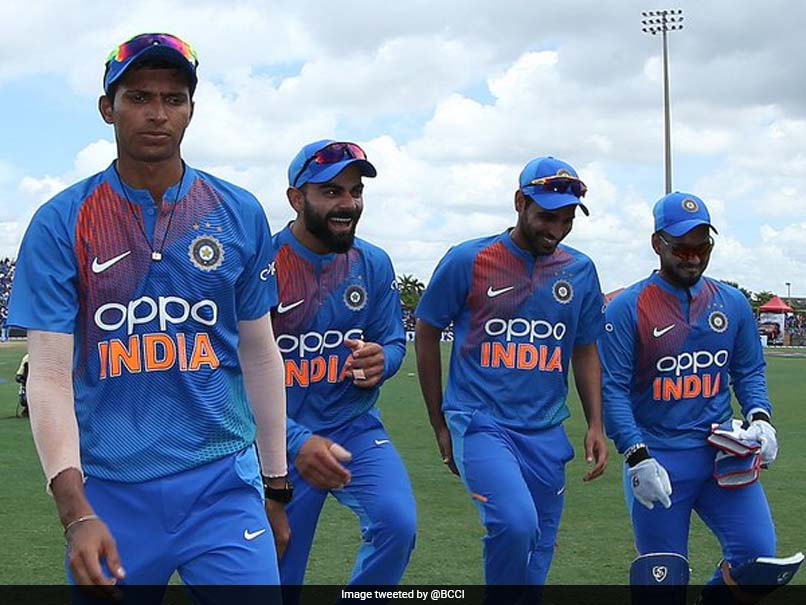 Navdeep Saini picked up three wickets in his debut match for India.© Twitter

India defeated the West Indies by four wickets on Saturday to take 1-0 lead in the three-match T20I series. After electing to bowl, Indian bowlers were on the mark from the beginning and sent half of the West Indies side back in the pavilion in the first six overs. Kieron Pollard played a fighting knock of 49 to help the West Indies post 95 on the board. For India, Navdeep Saini was the pick of the bowlers who managed to take three wickets in his first outing for India. Rohit Sharma was looking good before he was dismissed by Sunil Narine. The West Indies kept on taking wickets at regular intervals but the Indian batsmen managed to get over the line. For the West Indies, Sunil Narine was the pick of the bowlers who finished with figures of two for 14.

Debutant pacer Navdeep Saini led an impressive bowling display. Chasing 96 for a win, India huffed and puffed before reaching the target with 2.4 overs to spare. None of the batsmen contributed big with opener Rohit Sharma top-scoring with 24 while captain Virat Kohli and Manish Pandey making 19 each. Saini claimed three wickets for 17 while Bhuvneshwar Kumar took two wickets to restrict West Indies to 95 for 9 after they were put to bat.

India struggled in their run chase and they were reduced to 32 for 2 in the seventh over with opener Shikhar Dhawan (1) and wicketkeeper Rishabh Pant (0) dismissed cheaply.

Rohit's 24 came from 25 deliveries with the help of two fours and two sixes on a pitch which was not easy to bat on.

Veteran off-spinner Sunil Narine (2/14) did not allow India to get off to a good start by removing Rohit and Pant in consecutive deliveries in the seventh over. Pant was out the first ball he faced while playing an irresponsible shot.

Manish Pandey was out in the 12th over and Kohli followed him two overs later as India found themselves at a spot of bother at 69 for 5 in the 14th over with 27 runs still needed.

Krunal Pandya (12) added 19 runs with Ravindra Jadeja (10 not out) before he was out in the 16th over. But the target proved too small in the end as Washington Sundar (8 not out) hit a six to take India to 98 for 6 to wrap up the match in 17.2 overs. Earlier, Saini claimed three wickets in an impressive spell as India restrict a reckless West Indies to a paltry 95 for 9.

Opting to field, all the six Indian bowlers got at least a wicket apiece with Saini returning with figures of 3/17 in his debut match. The Indians were also helped by the reckless approach of West Indian batsmen.

There was no substantive partnership in the West Indies innings with the highest being the 34 between captain Carlos Brathwaite (9) and top-scorer Kieron Pollard (49) for the sixth wicket. Nicholas Pooran (20) was the only other West Indies batsman to score double digit figures.

India opened bowling with off-spinner Washington Sundar (1/18) and got a wicket in the second ball itself with John Campbell slapping straight to deep midwicket fielder Krunal Pandya.

The other opener Evin Lewis fell in the second over with pacer Bhuvneshwar Kumar (2/19) beating him with a knuckle ball to rattle his timber. Both the openers failed to open their accounts as the West Indies were reduced to 8/2.

Despite the two quick wickets, the West Indians continued to be aggressive in their approach and Saini exploited the situation by claiming two wickets in two balls in the fifth over.

Pooran, who was looking dangerous after hitting two sixes, went for a big shot but the ball ballooned up in the air for wicketkeeper Rishab Pant to take an easy catch. Shimron Hetmyer (0) then dragged the ball onto the stump for Saini's second wicket. West Indies procession to the dressing room continued with Rovman Powell (4) felling to Khaleel Ahmed (1/8) the next over -- 6th -- as they were reduced to 33 for 5 at the end of Powerplay.